Here Our Lady of Alno (Alno meaning “white poplar”) asks for the construction of a church in her honor through a poor peasant with an indomitable horse.

HISTORY OF THE APPARITION

On May 18, 1480, an herdsman who live near Canzano, named Floro di Giovanni, was plowing the land about a third of a mile from the walls of that town, towards Libeccio, suddenly saw an oxen kneel, at around six o’clock in the evening.

Astonished for what happen, which he soon knew was not natural, and straightening up from the curved bend on the plow, he observed above a white poplar tree, which is commonly called Alno, or Alano, a majestic Lady, in whose presence he also prostrated himself. Then he heard Herself say:

“I am the Queen of Heaven: go to Canzano and tell that people that it is my will that a Church may built in my honor in the Plain of Castellano.” 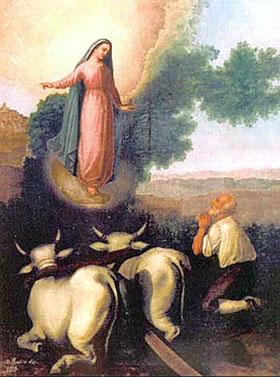 The good Floro obeyed immediately, and left the oxen to Canzano: he told, he testified in the best way he was capable of regarding the vision and the command; but far from being believed, he was mocked and insulted, and so decided that it was best for him to return, sadly, to work.

On the following day, at the same hour, the Virgin, dressed in white and rested on the ground appeared to Floro for the second time, who likewise plowed the same land: who at once prostrated himself to the ground, no less than the oxen, and with respect and with pain reported the refusal of the Canzanese. Accepted with goodness the justification, She disappeared, without having spoken. 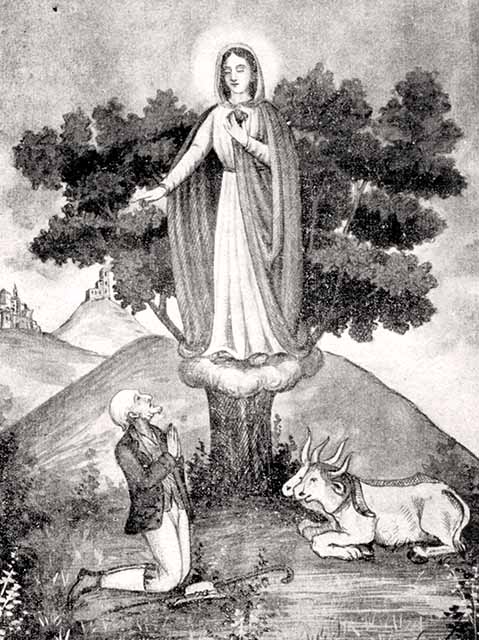 She spoke, however, on the following day, May 20, again at six pm when She appeared to the fortunate herdsman for the third time; he ordered him to return to Canzano, to try to mount on the indomitable horse of Falamesca de Montibus, as proof of the truth of the apparition, to then let himself be guided by that horse to the place designated where She intended to be honored.

Excited, the herdsman went back immediately to Canzano, repeated the order received, and declared that he was ready to verify it in the manner indicated to him. The condition was accepted with laughter, but a great number of people gathered around Floro to see where it would end.

The horse mentioned about was so beautiful, but became so ferocious at the same time, that the owner, not being able to approach them anymore, had removed a table from the upper floor to the stable, and from up there to feed it, throw the grass on the manger. The senior Falamesca condescended with pain to the experiment Floro was about to do, left to protest that he would not answer for the danger he was facing.

The numerous bystanders where terrified that Floro, upon entering the stable and encountering the horse might receive only bites and kicks; but were all amazed when they saw the horse all meek being led out, and without moving, welcomed the rustic knight on his back. Abandoned to its instinct, the horse traveled himself straight to the Piano del Castellano. There it came without reins and without a guide, turned three times around a space, and finally knelt and bent his head to the ground.

The crowd that followed him in silence then broke out in cries of tenderness and joy: and without delay, they gave themselves to work, marking the boundary where the horse have made its three turns. From the connection and diversity of the walls it is easy to recognize the Church erected then, by the two extensions made later. At the same time, another small church called “Church of Pardon” was built on the site of the first apparition, where it was painted in fresco: such as it still exists on the wall on which the altar rests. 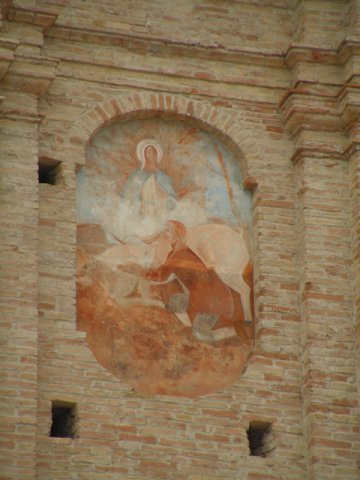 Extending itself behind of about some palms, the people felt not to do any modifications of the sacred and so a monument in 1788. In the precise points of the two other apparitions two existing Oratories were erected, with canvas paintings that express them. Except that since the paintings are more exposed to the weather and the canvases are worn out, they have been renewed from time to time.

The horse which took Floro to the site of the apparition, which was brought back to its manger and was once again returned indomitable and equally proud that it feels almost indignant he had to serve profane uses, since he had been elected as instrument of a prodigy of Heaven. (Text quoted from the official website)

THE MIRACLE OF 1614: A LIGHT ILLUMINATED THE WHOLE CHURCH

In June 1614 another miracle happened: a light illuminated the whole Church, but it was not the only prodigious event of Our Lady of the Alno. As a pious tradition of the canzanese to visit the Madonna in the evening and to pause for prayer. 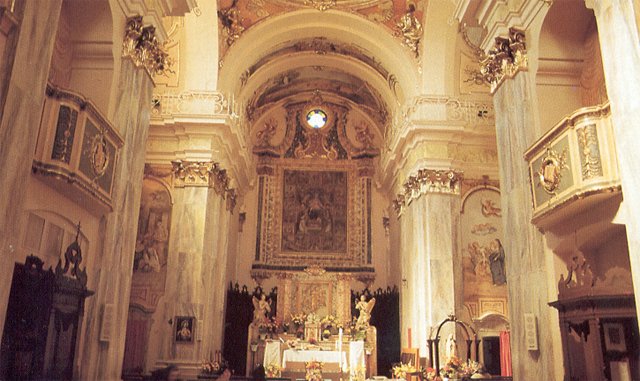 Five lamps burned before the sacred image; suddenly everyone saw on the breast of the holy image a star appear as big as a grain of lentils, whose splendor illuminated the church; after a cleric sang the litanies, the light in about half an hour, slowly faded away.

Over the centuries, the Madonna dell’Alno performed numerous other miracles and countless thanksgiving were raised to her by her devotees. 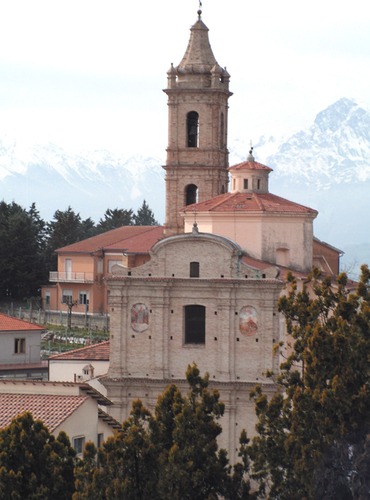 Next to the church, on the Piano del Castellano, the Cansaneses built a Rectory for the support of a priest, in celebrating the Divine Mysteries. In 1574 the Confraternity of SS. Rosary was founded. 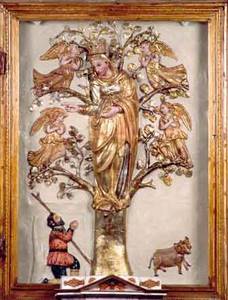 PRAYER TO OUR LADY OF THE ALNO

O Virgin Mary of the Alno,

who deigned to turn your maternal gaze to our place,

turn your compassionate eyes upon us again.

Stay forever in our families,

for with you, Jesus will remain,

and so joy, consolation, love and fear of your Son.

and free us from all evil of soul and body.