The Sanctuary of Santa Maria delle Grazie (Holy Mary of the Graces) in Stia (Arezzo), is known for the apparition of the Mary, which, according to the chronicles, took place on May 20, 1428 to Monna Giovanna, a ordinary person who lived near this place, which used to be a farm belonging to the Hospital of Santa Maria Nuova in Florence.

HISTORY OF THE APPARITION

It was precisely the year 1428 and Mona Giovanna one day, taking advantage of a moment of clear weather, left her cottage to dedicate herself for the work in the fields. Suddenly she was surprised by a strong storm and, unable to return to her home, she found a refuge in a cavern covered with tree trunks, located above a white boulder. Having reached the shelter, Giovanna began to pray.

Suddenly she was enveloped in a light of exceptional splendor and a celestial figure of a Woman of extraordinary majesty and beauty appeared to her, placing her foot on the white boulder. Giovanna felt and understood that the Lady was the Mother of God. The Virgin spoke to her maternally saying:

“If the people wanted to remove so many greater punishments and misfortunes, they would build here, in her honor, a Church in the place chosen by herself; and built that they had it, they paid homage and veneration to her with constant prayers “. 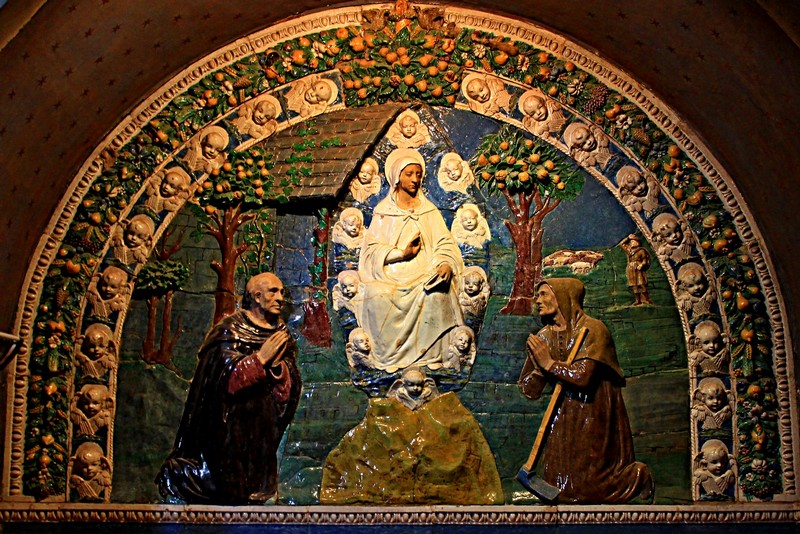 The place where Giovanna had taken refuge continued to shine with a very bright light when a shepherd, Pietro Campodonico, approaching saw the miracle in person. Shortly after Giovanna repeated the narration to Messer Luca, parish priest of Stia, who was quick to believe her, knowing Giovanna’s goodness and simplicity: immediately he went in procession with the parishioners to the place where the miracle happened. Feelings of religious piety awoke in all the people of the countryside, spreading not only in the nearby parishes, but in the entire Casentino valley, up to the cities of Arezzo, Florence and Siena. 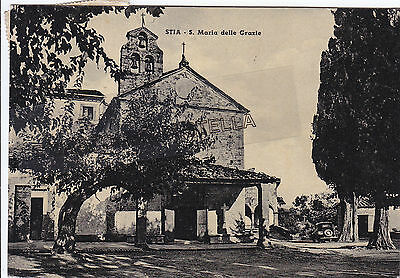 The construction of the Church, begun by the unanimous will of authority (including “Messer Luca lo Pievano” from Stia and Conte Neri from Porciano) and by the people, with the offerings and gifts left by the devotees. It was completed on 8 September 1432. In September 1474 a sudden fire totally destroyed the building with all the furnishings and images. The Spedalingo of S. Maria Nuova, to which the Church belonged, was immediately rebuilt, assisted by the offerings of the faithful. In 1490 the building was already rebuilt as we now see it: the Sanctuary was called from the beginning Santa Maria delle Grazie: on May 20 of each year the faithful of the neighboring countries come processionally to celebrate the feast of the apparition with the characteristic “Procession of the Agiolini”. 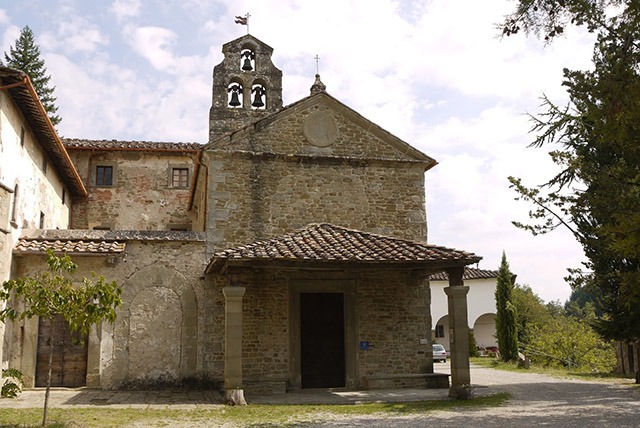 The Church is an elegant edifice of Florentine architecture, preceded by a portico on the left of the facade, a three-light sailed bell tower in sandstone. The interior consists of a single nave with a large presbytery. Two carved stone altars lean against the side walls, of which the one on the left of the XV century is remarkable, finely carved. On the left wall there is an octagonal stone pulpit, supported by two shelves. The presbytery, a work of artistic value of the XVI century, square in shape, is framed in the façade by two pillars and a stone archivolt, decorated with raised foliage, finely worked and is enclosed inside by a stone cornice, decorated with a series of 30 enamelled terracotta cherub heads, interspersed with 5 coats of arms of the Santa Maria Nuova Hospital. In the pendentives are the cylindrical reliefs of the 4 Evangelists, also in glazed terracotta. 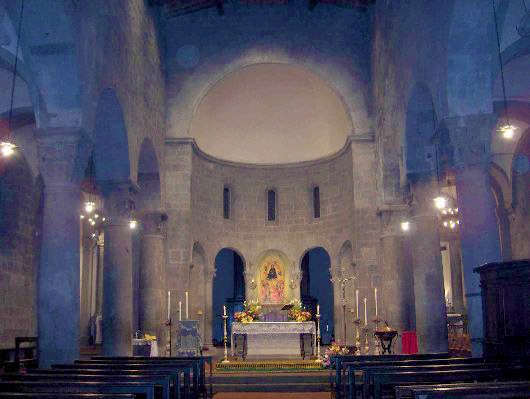 Both the reliefs and the glazed frieze are works of Robbian art, from Andrea’s workshop (1435-1528), to refer to the beginning of the XVII century. In the underlying rooms, in the shape of a rib, there are two large Robbians depicting the apparition of the Madonna to Blessed Giovanna and to the crib, on the right and left. Under the Robbiane school there is an inlaid wooden seat from the 15th century. In the center of the presbytery, the high altar, in worked marble, rises above the boulder where the Virgin appeared. 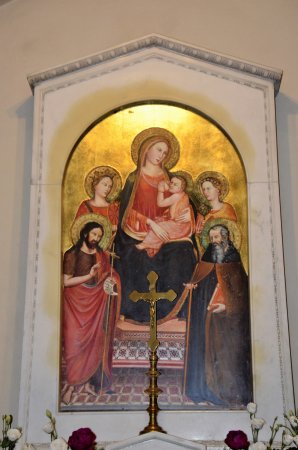