On May 26, 1432, Giovannetta, or Giannetta, 32 years old, known by all for her virtuous life, her christian piety, her sincerely honest life. She was an unhappy bride of Francesco Varoli, farmer or maybe a soldier, who constantly humiliated her and mistreated her.

One day, at around five o’clock in the evening, she was out of the village along the road to Misano, totally preoccupied with the thought of how she could bring home the bundles of grass that she had come to mow for her animals, when suddenly she saw a beautiful and admirable Lady coming from above and standing right next to her, of majestic stature, of a fair face, of venerable appearance and of unspeakable and never imagined beauty, dressed in a blue dress and her head covered with a white veil. 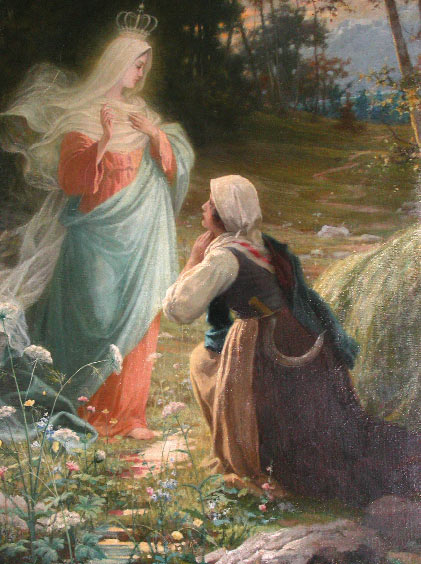 And the Lady immediately to her:

“Don’t worry, daughter, because it’s really me. Stop and kneel in prayer. “

Giannetta replied: “My Lady, I don’t have time now. My mares await this herb. “

Then the blessed Virgin spoke to her again: “Now do what I want from you …”

And so saying she put his hand on Giannetta’s shoulder and made her stay on her knees.

She went on: “Listen carefully and keep in mind, because I want you to report wherever it will be possible with your mouth or have this said …” 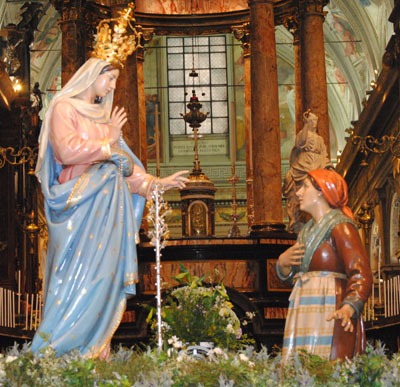 And with tears in her eyes, which according to Giannetta’s testimony were, as they seemed to her, like shimmering gold, she added:

“The my most High Almighty Son intended to annihilate this land because of the iniquity of men, because they do what is evil every day more and more, and fall from sin to sin. But for seven years I have implored mercy from my Son for their sins. Therefore I want you to tell everybody and everyone that they fast on bread and water every Friday in honor of my Son, and that after vespers, in devotion to me, they celebrate every Saturday. Half the day they must dedicate it to me out of gratitude for the many and great favors obtained by my Son through my intercession. “

The Virgin Lady said all these words with open hands and as if she were afflicted. Giannetta said, “People won’t believe me.”

The most clement Virgin replied: “Stand up, do not be afraid. You report what I ordered you. I will confirm your words with such great signs that no one will doubt that you have told the truth. “

Having said that, and having made the sign of the cross on Giannetta, she disappeared before her eyes. Returning immediately to Caravaggio, Giannetta reported everything she had seen and heard. Therefore many – believing in her – began to visit that place, and found there a spring never seen by anyone before. Some sick people then went to that spring, and subsequently in ever-increasing numbers, trusting in the power of God. And the news spread that the sick were returning healed from the infirmities they suffered, through the intercession and the merits of the glorious Virgin Mother of God and our Lord Jesus Christ. The spring flowed at the spot where Giannetta was kneeling. 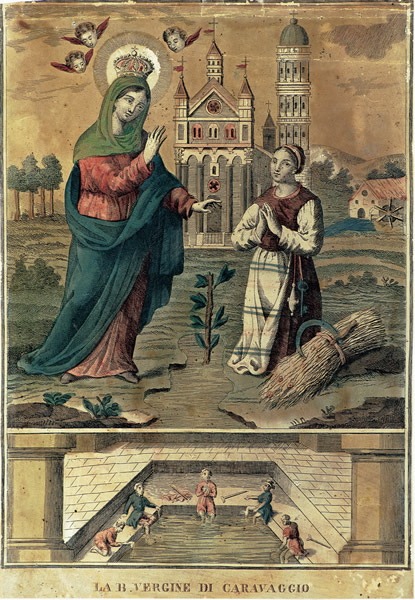 The apparition of the Madonna occured during the difficult time for the people of Caravaggio who lived on the border between two states: Venice and Milan. Those lands were a crossroads of looting, of bloody struggles, of raids of fortune seekers. Getting hold of it meant controlling the Bergamo and Cremonese populations in the military and economic fields. Hence the struggles, the sieges, the massacres. Only under the dominion of the Sforza Caravaggio did it experience a period of relative peace. It remained state of Milan until the unification of Italy, passing to the province of Bergamo in 1861. 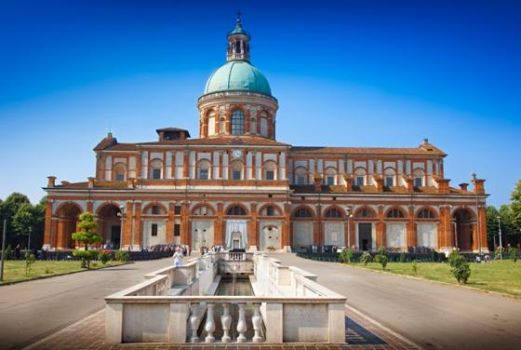 From that distant year of 1432, pilgrims consider Caravaggio one of the centers of spiritual attraction in the Marian geography of Italy: more than two and a half million pilgrims (and among them also S. John Paul II in June 1992) come to this grandiose temple built on the plains of Lombard to venerate Santa Maria del Fonte (Our Lady of the Fountain)

Caravaggio is not only one of the most important Marian temples in Italy, with a century-old history and a rich spirituality; it is also an art treasure chest. On July 31, 1432, just two months after the apparition, the bishop of Cremona granted the right to “pose the first stone of the new church in place”.

Like every sanctuary, Caravaggio has also its own history of grace. The “historical” miracles are referred to pilgrims in the underground of the Holy Fountain, thirty meters long with five cells. In the last cell there is a large Siena marble basin, where pilgrims can draw blessed water. Among the interesting episodes is the “the challenge of Graziano”. A certain Graziano, incredulous, wanted to challenge the place where Mary placed her feet.

Taking a dry branch, he planted it and immediately saw it covered with flowers and leaves.

Another episode is that of Domenico Mozzacagna. In 1520, accused of robbery, he was to be beheaded; but the executioner’s hatchet several times dropping on his neck did him not even a scratch. It was May 26th and the crowd cheered him miraculously.

On the evening of August 9, 1650 an unknown pilgrim met his arch enemy here who ran after him trying to kill him. The unfortunate sought escape in the temple which was at that moment closed. Implored the protection of Mary, the bolt of the door broke allowing the attacked man to place himself safely at the foot of the statue of the Virgin after that the door had immediately closed behind him.

PRAYER TO OUR LADY OF CARAVAGGIO

O Most Holy Virgin of Caravaggio,

from an ancient and honored devotion,

on this day when we celebrate your apparition,

we pray that the hope

of each one who approaches you

may not be disappointed,

and no one will remain in vain supplication.

Our Lady of Caravaggio, pray for us

O most holy Virgin of Caravaggio,

that in your temple

and through your patronage the blind

may return to the light of faith,

the wavering and the indolent on the Christian path

learn to walk swiftly in the way of divine commandments,

that deaf ears may open to the divine teachings,

that those who are dead from sin

may return to true life

where there is light of mind and peace of heart.

Our Lady of Caravaggio, pray for us

Anyone who turns to you to imploring you help,

may we become stronger in faith,

firmer in love and so ardent with love that,

not following the enticements of evil,

we may never deflects from the right way,

Our Lady of Caravaggio, pray for us.

**(audio of the video is in italian but you can turn on auto-subtitle in english as needed):