It was June 14, 1825 when Lavalleja and members of the provisional government with officials, military leaders and the people went to the parish. There, for the first time, the tricolor flag folded in front of the statue of the Virgin. And the soldiers also bent their knees …

It only takes 20 minutes by ferry. From the port of Buenos Aires (Argentina) to that of Montevideo (Uruguay), a city founded on December 24, 1726, as tradition says. From the ship the passenger’s eye no longer sees uninhabited spaces along the coast. But, over two centuries ago – it is said – that a fort was built to safeguard the first population. Northeast of the Pintado hills. About 20 km from the current city of Florida.

The story that Sister Rosaria Piazza tells me, a missionary for 42 years in Argentina, with her Italian-Spanish language, becomes captivating because it accompanies the words with an interesting historical documentation. Thus sources and photos feed my curiosity. The “Cabildo”, as if we were saying the “government” of Montevideo – as Sister Rosaria begins – next to the fort also planned the construction of a farm not only for the maintenance of the Fort but, above all, for the security of the garrison. And “with a colonial sense, he arranged for families to settle on the farm to populate that piece of land.”

Among these families was that of the Indian Antonio Diaz. It came from Santo Domingo de Soriano. Enterprising and determined man. He had lived in that region since 1761 and had opened a grocery store in the neighborhood. In 1779, historical sources say, the pastoral care of the people was entrusted to the mercedary religious missionary friar Vicente Chaparro. The latter, in agreement with the Bishop of Rio de la Plata, Mons. Sebastian Malvar y Pinto, worked to build, in the highest part of the hills, a temple for the spiritual devotions of the people of the farm, called Villa del Pintado.

The friar then summoned the Diaz family and others to assemble and to choose the place on which to build the chapel to be dedicated to the “Queen of Angels”, invoking it as “Our Lady of Lujan”. Those present opted for Antonio’s land, since it was located on the highest part of the hill. The Indian then gave a thousand meters of land. Six hundred for the construction of the church and four hundred for further housing.

In 1782 the mercedary friar acted as a spoke to the competent authorities in behalf of the farm people who asked for the passage of the chapel to the “Vice-Parish”. In fact, according to the documents, on 9 July 1788 a priest takes care of the faithful and the “chapel of Our Lady de Lujan del Pintado”. Thus was born the cult of the Immaculate Conception Virgin of the Rio di Lujan.

Why the name of the “Thirty and Three”?

So why is the Madonna venerated in Montevideo called “La Virgen de los Treinta y Tres”, or the “Virgin of Thirty and Three”? I asked, as I was amazed, to Sister Rosaria. Also because the title “Madonna de Lujan” reminded me of that of the Virgin, patroness of Argentina.

“Tradition – the Salesian nun continues to recount – tells that Antonio Diaz not only gave the soil but also provided the image. The Jesuits who lived on the “Our Lady of Desamparados” farm, near the city of Florida, had asked for it. The Indio had acquired its image, proposing it to the veneration of the faithful. He first placed it on a pillar and then in a small niche carved out of a tree trunk. “

It is certain knowledge- says Sister Rosaria – that the image comes from a Jesuit Mission in Paraguay. Because the statue restored in 1909 by the lords Monestier and Hnos declared that that quality of cedar wood came from the aforementioned Mission and also retained the color and scent characteristic of its species. They noticed that its primitive color had also been respected: blue, red and gold, typical of missionary artistic decoration. 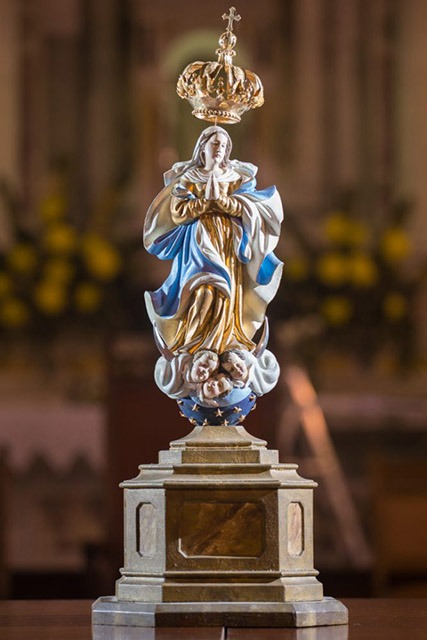 The writer Juan Antonio Presas says, in this regard, in one of his books that John Paul II himself, going to Uruguayan land, had said:

“The wooden statue of the Virgin is the fruit of the wood of your land. Indigenous hands worked it and brought it to this country. The love of indigenous people, whites and mestizos built a small niche for her and offered to her their own lands “.

At that time the whole area of Rio Uruguay was called Uruguayan land.

In 1791 the Pintado Chapel became “Affiliate Parish” and on February 8, 1805, Bishop Benito Lué y Riega, Bishop of Rio de la Plata, elevated it to Parish. The curate in charge is Santiago Figueredo. He had studied at the University of Cordoba. This, in a short time, understood that the “Villa del Pintado” was a rough land, with little water and wood. For this reason, few families lived on the farm. The curate, in agreement with these, described, in a letter, the narrow situation of the people, asked the government of Montevideo and the “Cabildo” for the farm, near the streams, of “Santa Lucia del Pintado”. There the people would move and work those lands.

The civil and ecclesial authorities approved the plan of the curate. The new “Villa” thus, reads the documents, on April 24, 1809, is called “San Fernando de la Florida” in honor of the King of Spain and the Prime Minister the Count de la Florida-Blanca. But eventually, the people nicknamed it, for its natural resources, “La Ciudad Florida de Maria”, the flourishing city of Mary.

It was in this land, during the years of oppression, 1809, that the first secret meeting of patriots took place. Right here, says Sister Rosaria, “the feeling of independence was cultivated”. It was 1811. The men met in the parish house to discuss what to do. And on a May morning, the first squadron of patriots was established in the small township of Florida. The curate’s brother was its head. But, before marching towards Independence, they found themselves praying around the Eucharistic Table to implore protection from the Virgin. On this occasion, the priest received the appointment as chaplain of the Army of the Fatherland.

Meanwhile, “Thirty and Three” Eastern patriots, from Buenos Aires, on April 19, 1825, headed by Juan Antonio Lavalleja, marched towards the “Oriental Band” of the country, to free it from Brazilian rule and to return it to the “United Provinces” . Their tricolor flag had the inscription: Freedom or death. The victories of Soriano, Colonia, San José, Guadalupe encouraged men to enlist. They won. And, precisely, in “Villa di Florida” they constituted the first government, in the home of Doña Ana Hernandez. It was June 14th. Lavalleja and members of the provisional government with officials, military leaders and the people headed to the parish. There, for the first time, the tricolor flag folded in front of the statue of the Virgin. And the soldiers also bent their knees. “Thus – concludes Sister Rosaria – the image of Lujan, before “of the Pintado” and today “of Florida,” on that glorious date, it shone like the “Virgin of the Thirty and Three “.

I thought the story was over because the crossing was almost over. The sailor on duty had announced that only 5 minutes were left to moor the ship.

Only two notes were missing:

“On August 25th – my travel companion reads – the government undermines itself in the home of Doña Ana Hernandez. Father Juan Francisco Larrobia occupied the presidency. Two minutes were written: one formulated the declaration of independence of the Eastern Province, the second the incorporation into the core of the United Provinces. Once the two laws were sanctioned, those present placed the work that had already begun under the protection of the Mother of God. “ 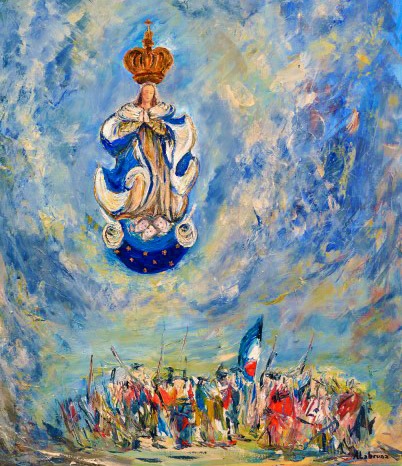 The ancient image of “Lujan del Pintado” once again sees the representatives of the people and the flag prostrate. Thus the dates: April 19, June 14 and August 25 become significant for the Uruguayan people. For this reason, the Madonna of “Lujan del Pintado”, venerated in Florida, and before which the heroes of the crusade had prostrated themselves, is acclaimed as the “Virgin of Thirty and Three”.

Furthermore, a document dated May 15, 1892 reports the speech that Dr. Eusebio de Leon, secretary of the Bishop of Montevideo, had proclaimed in the Santuario de Lujan in Argentina, during a pilgrimage:

“It was the heroic Thirty and Three who collected the flag of the Fatherland, and, after having carried it in triumph for all areas of the Republic, they lowered it with glory before the image of Mary (Virgin) de Lujan, in the historic villa of Florida. There, under the secular throne of Our Lady and in the name of Almighty God, who rules the destinies of the world, the Eastern Republic of Uruguay was autonomous!”.

And at this point in the story the ship was docked. The story was over. But not the reflections that the facts had aroused in me.

(audio in Spanish – ** turn on subtitle and auto-translation in English) 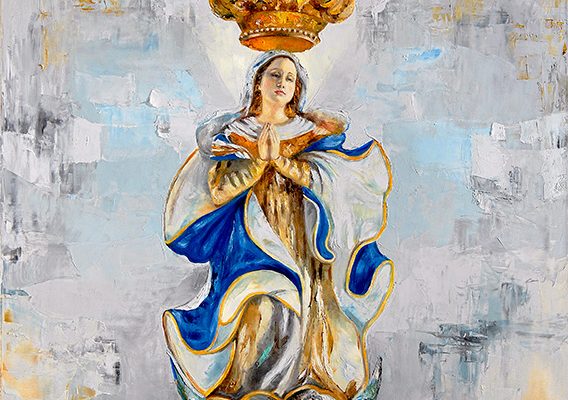