The Cathedral of Our Lady of the Prado is located on the site of an ancient Romanesque chapel founded in the place where, according to tradition, the Virgin appeared to the villagers.

The Virgin of the Prado is a Marian devotion revered in Ciudad Real (Castilla-La Mancha, Spain), of which she is patron. It is a Baroque statue, of the Valencia school, made of polychrome wood carved by sculptors such as José Mara Rausell and Francisco Llorens. Ancient documents found in the parish archives of Santa Maria del Prado (Ciudad Real) and those of Velilla de Jiloca (Zaragoza), testify for the veracity of this legend.

Around the year 1013, Mosen Ramon Floraz, an Aragonese knight, a private servant of King Sancho el Mayor of Navarre, was near Velilla de Jiloca when the horse sank its leg in the same fountain where he was drinking. Mosen Ramon, as he tries to free his steed, discovers a large underground cave. Attracted by curiosity he enters the earth and finds, in a niche in the wall, a beautiful statue of the Virgin Mary, in the form of a Roman matron sitting with the child on her lap and a parchment written in ancient Latin in which spoke of this statue and how it had ended up in that place. It is the Virgin of the Tournaments (Virgen de los Torneos), buried three centuries earlier by devout Christians to save her from the destruction wreaked by the invading followers of Muhammad.

Happily moved by this discovery he dared not move the image, sure that that discovery was not the result of chance, but of a heavenly gift. Later, however, he became convinced that King Don Sancho, his master, could pay more tribute and veneration to the aforementioned statue and decided to load it on his horse with the intention of heading to Velilla. The horse, however, refused to walk, no spurs, no lashes, no attempt to move. Fearing that the image did not want to be carried irreverently and unsafely on the back of a horse he decided to go to Daroca to make a precious casket in order to carry it in a more worthy and decent way. 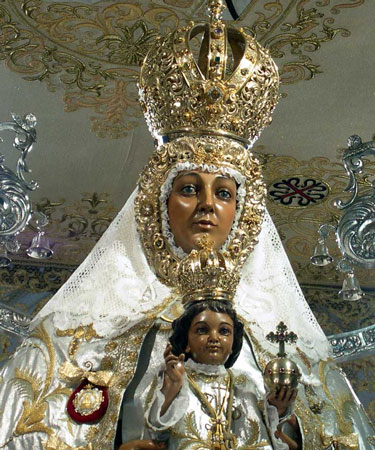 The journey was not without difficulties but thanks to heavenly protection he managed to get to his destination. With great joy King Don Sancho took possession of the Virgin. A succession of Christian kings, then inherited the casket containing the precious statue nicknamed Our Lady of the Kings. She was also brought into battle as a protection for the army that were many times saved by the intercession of the Holy Virgin.

At noon on May 25, 1088 Marcelo Colino from Toledo was returning to Cordoba with the Holy Virgin to return it to the monarch. On the feast day of St. Urban, he stopped to rest in the shade of an oak together with his entire entourage, in a small village called Pozuelo Seco, before returning to Cordoba where, anxious and impatient awaited the monarch. Some curious people approached him and he showed them the sacred image of the Virgin. 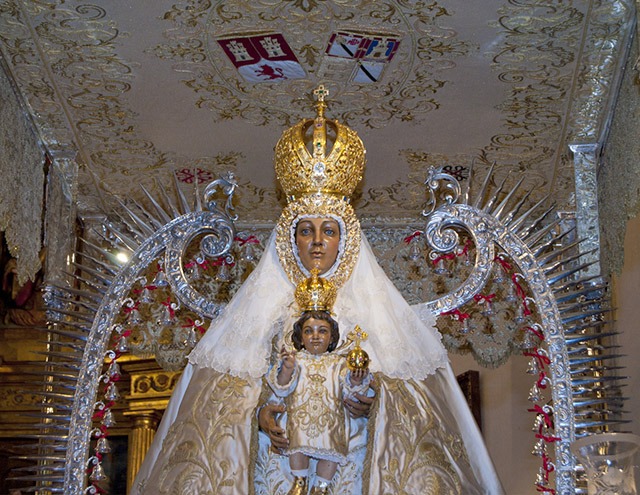 The moment he showed this precious cargo, the villagers, ecstatic with such beauty, beg him to leave it with them so that they can raise a temple in her honor. But the fervour of these humble peasants, early inhabitants of Ciudad Real was not enough to convince Marselo to leave them his great treasure.

Among all the citizens, however, there was one who continued to remain in prayer throughout the night for their desire to be granted. At one point, he saw a white dove perched on the oak where a few hours earlier the Virgin had been placed with the Child. Eager to send away the beautiful dove, he threw a stone and lo the dove turned into the Virgin Mary, surrounded by luminous explosions of brilliance. Stunned by this vision, he fainted for the great astonishment but after he ran joyfully to give the news to the neighbors, shouting:

“Miracle! Miracle! The Virgin is back.”

Great was the excitement of the whole county. For about nine centuries the Virgin of the Prado has become the patron saint of Ciudad Real.

Driven perhaps out of divine inspiration, Marcelo returned to the village that so longed for his treasure, when amid songs of joy he saw that his Holy Virgin were in the people’s hands and were raising her high to honor her. Between tears and cries of joy they chanted to the miracle!

Astonished Marcelo tried to take her back but became so heavy that it was not possible to put her back in the casket. After spending three days in prayer, still it could not be lifted away so he resumed his journey to communicate the miracle to Don Alfonso. The king decided to observe with his own eyes and went to the town and among the joy of the country he too was moved before the Holy Virgin who had once again chosen where to stay.

In 1195, during the reign of Alfonso VIII, as the Almohad approached Alarcos, the humble inhabitants of Pozuelo Seco hid the statue in a safe place for fear of losing their precious treasure. By 1212, when peace returned in Las Navas de Toulouse, the Blessed Virgin was able to regain back her throne in the church again. 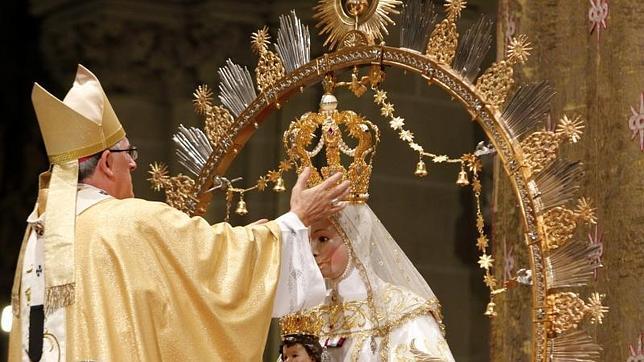 After the 16th century the image was mutilated at the height of the knees, to give greater relevance to the face. This mutilation was widely criticized, regardless of the mentality of the time, and the cut fragments were used to create other smaller images.

(auto-subtitle in English available)** – see below for instructions

**(audio of the video is in italian but you can turn on auto-subtitle in english as needed):