We have the first important testimony since 1155, when, on the occasion of the campaign of the Germanic emperor Federico Barbarossa against Tortona, one of the hosts hired by the emperor, he went up to Stazzano, plundering it, setting it on fire and razing the village and the nearby Serravalle castle to the ground.

The inhabitants of the village then left their homes and, to escape the fury of the soldiers, took shelter on the heights of the mountain, then known as Mount Arimanno, recommending their safety to the Blessed Virgin Mary, Mother of God. Their invocations were heard and so the protection they implored was equally felt. When the enemy troops withdrew, the people of Stazzano wanted to built a small chapel on the hill, in honor of Our Lady of the Mount who had protected them in their dramatic situation. This was the first chapel in the area dedicated to Our Lady. 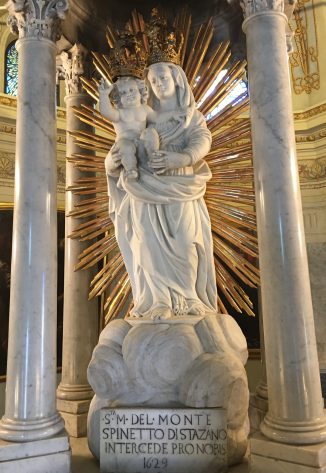 Later, over the years, given the difficulty of climbing to the top along unsecured and steep paths, covered with dense forest and undergrowth vegetation, with the presence of many wild animals, it was forgotten and fell and went into ruin.

Other times during its long history the population of the valley was forced to take refuge on the mountain, always following invasions and devastations of which the territory was subject. Every time the small building went from the state of abandonment and decay to a restructuring or even to a reconstruction and fluctuating devotion more or less long over time. 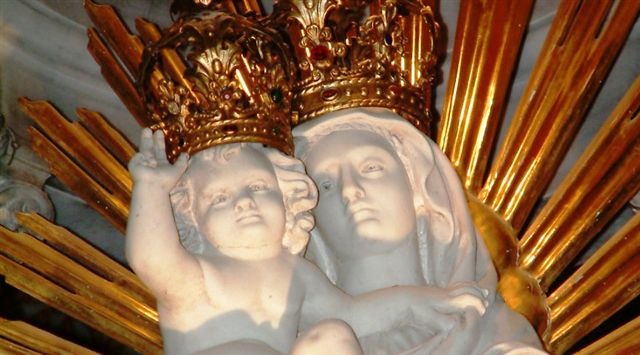 At the beginning of the seventeenth century, the great dangers that happened centuries before were repeated for Stazzano and its surroundings: a new violent military aggression this time by French troops. The Stazzanese fled to the mountain again, now called it with the name of Monte Spigno (spine) for the presence of a large quantity and variety of thorny bushes that covered and still cover the slopes of the mountain, among which the hawthorns stood out.

Here is what the rector of the Sanctuary, Don Sesto, tells in a book entitled “The mystery of the white dove”: 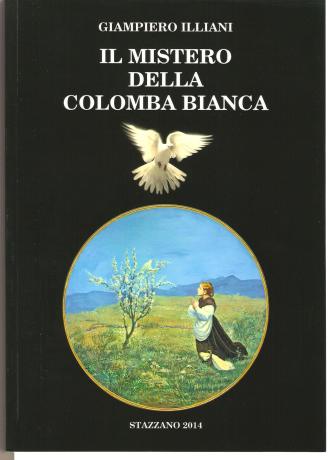 “It was the year 1620, during the invasion of the French, the prodigy of the white dove occurred, of which the tradition and the chronicles of the time speak, prodigy that is found in the Sanctuary in the painting that crowns the ceiling of the apse behind the altar (the reproduction dominates the frontispiece of the book) and in the glass above the entrance door.

For several days, around the faithful who had fled to the mountain to escape the invader and were in prayer, a candid dove fled, without any fear, which at a certain moment went to settle on a hawthorn bush, prodigiously blooming out of season, not far from the cross before which the faithful are praying. The people had a clear sense that it was Our Lady herself who came to listen to the prayers addressed to her with confident devotion. A particular circumstance underlined the tangible protection of Our Lady…

At the same time as the dove landed and the tree flourished, a young girl, who had also gone up with her fellow villagers, who had until then been considered deaf and dumb since birth, while praying beside the hawthorn, perching on the white dove, regained the use of her tongue and spoke, or rather shouted the news to announce the event. For eight days the dove remained suspended and crouched on the bush.”

Here they gathered again in confident prayer and, as there was no longer the primitive small chapel, they raised a cross on the top. Despite the difficulties of the time and the danger of the soldiers, the news spread rapidly and many of the faithful from the valley who wanted to see the event personally went on pilgrimage to the Cross. Even the bishop of Tortona personally saw the miracle. 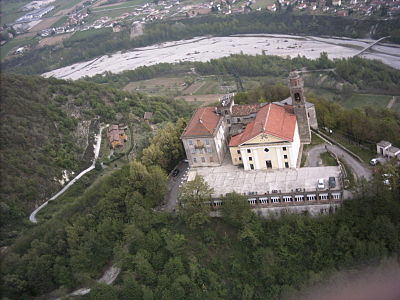 Everyone believed and saw the incident as the symbol of hope at a time of great dismay for the population. As an expression of gratitude, devotion and love of the whole country towards the Blessed Virgin, it was decided unanimously to rebuild the ancient chapel, bigger and more beautiful. The Bishop then proceeded to build a magnificent Sanctuary.

The most pious Bishop, Mons. Paolo Arese, called the “Saint”, who governed the Diocese of Tortona from 1620 to 1644, went up to the mountain for the laying of the first stone in 1629 and ordered that the high altar rise on the same point as the flowering hawthorn on which the dove had settled. In the year 1633 and on the top, the construction of the Sanctuary was almost completed. The Sanctuary could only take its name from the hawthorn chosen by the white dove, the type of hawthorn bush, of which many still cover the slopes of the mountain today. The Bishop wanted the Sanctuary to be dedicated to Our Lady of Monte Spineto. 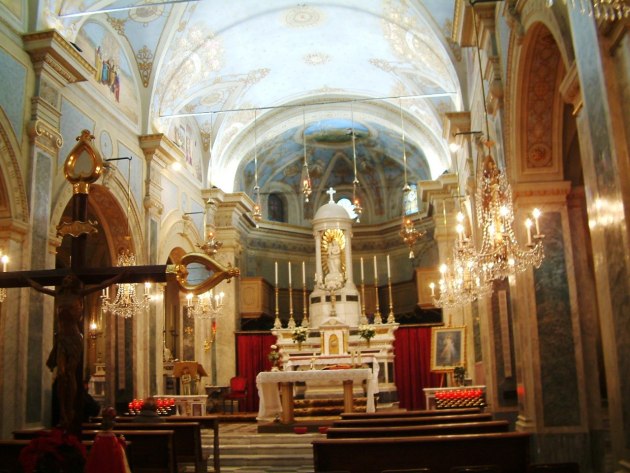 Thus arose the present Shrine, in its original structure. Between 1839 and 1840 the Sanctuary underwent works in the presbytery. In 1853 the exposed stone bell tower was built. In 1866 an arch was added to the front of the central nave and side aisles and the facade was decorated, framed by pilasters and surmounted by the Marian monogram. 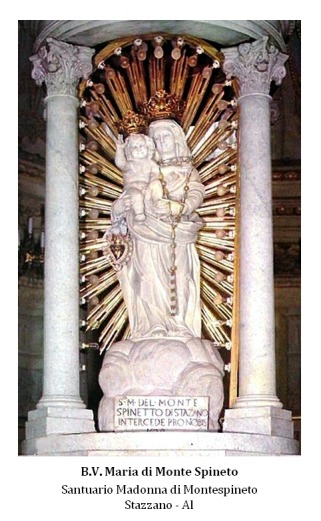 PRAYER TO THE MADONNA DI MONTESPINETO

Ave Maria!
How sweet is this greeting!
It is the greeting of God and divine motherhood.

Dear Madonna,
Dear Madonna….
We repeat it to you with the love of children:
Ave Maria!
It is a sweet hymn of faith, of gratitude, of trust:

Ave Maria!
Most Holy Virgin of Montespineto,
dear and sweet Mother of ours:
turn your gaze upon us, open your arms and heart;
comfort and guide us your poor children.

Ave Maria!
Free us, O Mother, from the sad and fatal failures of immorality,
of blasphemy and unbelief.

Ave Maria!
O our great Lady,
save your people,
it gives peace to the world.
It is everyone’s cry, it is the cry of the hearts.
Receive us,
o Clement, loving and pious Mother.