Rossano, a town in the province of Cosenza, is proud to have an acheiropoieta image of the Virgin, where devotion for the same has existed since the sixth century. From the Greek ‘acheiropoietos’ means ‘not painted by a human hand’ (typical example on an Acheiropoieta image is that of the miraculous image Our Lady of Guadalupe) 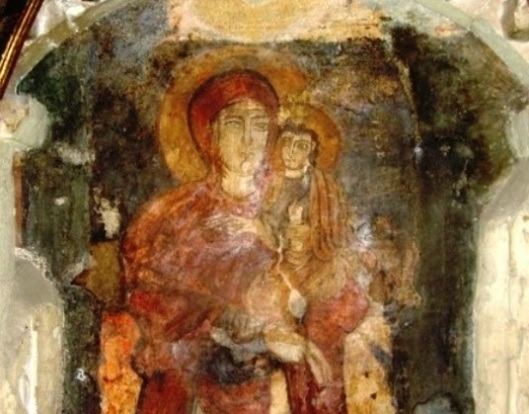 It is a frescoed icon on a fragment of a column that is located on a XV century altar inside the cathedral, in the central nave, enclosed in a marble niche. The image, which represents a virgin with the child, is of Byzantine style and is dated between the 6th and 8th centuries, depending on the interpretations. On the right side of the image, vertically, you can read, in Greek letters, the word ‘Theotokos’, meaning Mother of God. It is a full-bodied image of the Virgin holding in Her left arm the child Jesus and who has the right hand towards His Mother with a gesture of imparting a blessing and in His left hand holds a scroll. The Virgin wears a dark red cloak that also covers Her head. The latest studies carried out on the image reveal that the current fresco is superimposed on an older one.

The tradition / legend to which the image is linked renders this image to be counted among the ‘ Acheiropoieta ‘. This legend was once written on a parchment in Greek-Gothic characters that was preserved in the chapter of the cathedral. At the beginning of the seventeenth century the parchment was lost, but fortunately there still is an ancient Latin translation made by the canon Sammarco.

Tradition takes us back to the hermit monk Efraim who lived in a cave near Rossano, around 570. A man of royal blood, Prince Maurice of Constantinople, being the victim of political persecution, escaped by sea and landed in Calabria. He met Ephraim, who reassured him and told him that he had to return home, predicting that not only would everything would be resolved, but that he would also become emperor. But Efraim made him promise that if the prediction will come true, he would build a church dedicated to the Madonna on that cave with an image of the Virgin. Maurizio promised him and gave him a ring as a pledge. When he returned home he was acclaimed emperor but he forgot his promise. After some time Efraim went to Constantinople with the purpose of returning the ring. When the emperor saw him, he remembered his promise and so he set up a ship with various construction materials and workers to erect the church, giving orders that an image of the Virgin Mary should be painted in it. But the painting was very difficult to accomplish. In fact, all the artists tried in vain, because what they painted during the day, returning there the next morning they found it canceled. Then one day, an artist who had almost completed the image left a disciple during the night to watch the painting. The disciple saw a beautiful woman come out with a shining cloak that persuaded him to leave. The next morning, they saw this same woman painted on the bottom of the inside of the church.

The first church built was dated to the end of the sixth century, even if the current one, the cathedral, is basically from the 11th century with later reworkings. The construction of the wall that houses the image dates back to the Norman era, around the XII century. In the central apse, six frescoes tell the story of the Acheiropoieta.

The image, according to some, could be the work of the monks who took refuge in this part of the empire due to the iconoclasm persecution of the VIII century. The presence of these religious was very important for the culture of these territories in that they were enriched with works of art and manuscripts. Unfortunately, the great majority of these treasures were stolen or were victims of negligence. But Rossano still has one, a particularly important illuminated manuscript, the Codex Purpureus Rossanensis, a precious sixth century Evangelion or Book of the Gospel, written on parchment colored in purple, gold and silver. 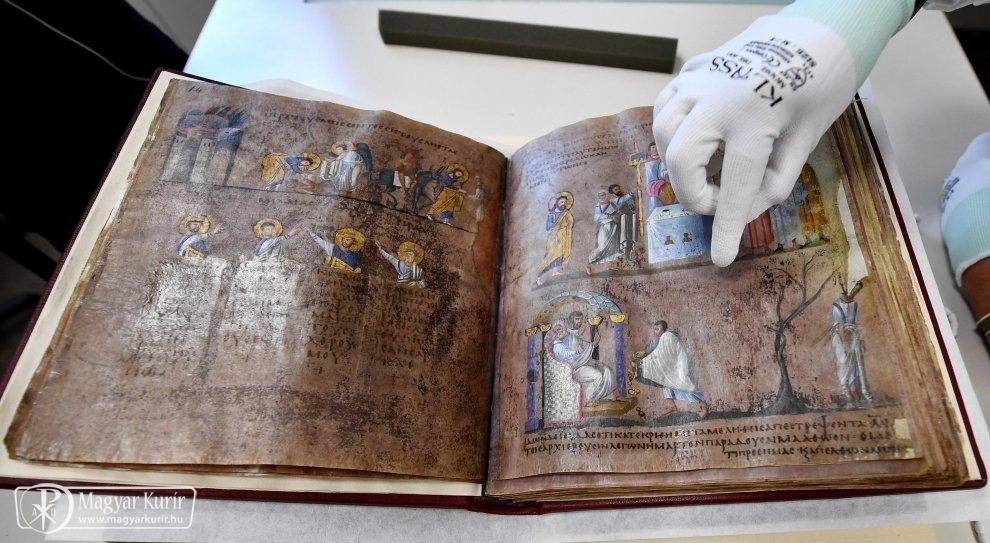 The Virgin of Rossano has always protected the community and the population and is attributed the merit of having saved the image and the church from the invasion of the Saracens, around 954. Our Lady was said to have appeared to the Saracens dressed in purple with a torch in Her hand. The sight, of the glory of the heavenly Queen, so terrified the invaders that they advanced no further and took to flight. Thus, the Muslims were driven out from the walls by Our Lady of Rossano Herself.

In the seventeenth century, Our Lady protected the town of Rossano from the plague, which raged in the surroundings areas, and also from the earthquake of 1783 which did only very slight damage of the town. When in the nineteenth century the French invaded Calabria, they could not take possession of the treasure of the cathedral, because it had been hidden, they wanted to appropriate instead of the ancient silver statue of the Acheiropoieta, a sculptured copy of the original image. The citizens rebelled but to avoid the confiscation they had to deliver to the French as much silver as the weight of the statue would have resulted. But when they went to weigh the statue, miraculously, it became light as a feather, so the rossanese with just a little sacrifice kept that treasure.

1) ROSSANO: THE BIZANTINE in CALABRIA