According to local history, in the year 1417, a painter named Feliciano Batone painted a fresco of our Lady of Sorrows in a small votive shrine, located under a large oak. A hermit from Siena, Francesco Maria Boninsegni, at that time was 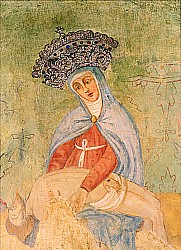 going around announcing that there was a great treasure in Lucignano, without however specifying what it consisted of. And it is the same local tradition that handed down to us the news of the first miracle, which occurred on the 8th of August 1467, when a young nobleman from Siena, pursued by his enemies, and feeling lost, stopped to pray and begged this sacred image assistance in order to be saved from his enemies. The enemies, or because the knight was made invisible, or because they remained confused in their ruthless chase, did not see him and therefore the young man was saved. The news spread quickly and the miracle soon became accepted by the people of Lucignano, who began to venerate the image of Our Lady. After this prodigious fact the devotion for this votive shrine grew enormously and the hermit Boninsegni eventually 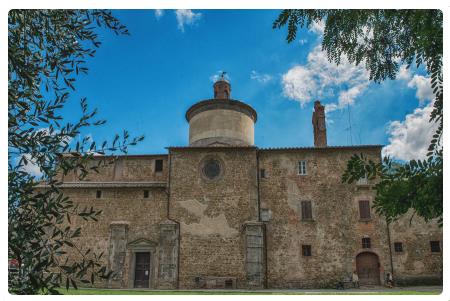 manifested to everyone that the great treasure of Lucignano consisted in our Lady of the Oak (Madonna della Querce). The faithful then built a small wooden chapel and in the following month of October 1467, the first mass was celebrated with an extraordinary participation of the people. The Bishop of Arezzo, Lorenzo Acciaioli, by reason that the number of devotees tended to grow more and more, ordered the construction of a new chapel of stone in the following year, larger than the previous one. The church was entrusted to the fathers Servants of Mary since 1575, even when it had not yet been completed, but was consecrated only in 1617. Following the suppression of Leopoldina in 1783, which dissolved the order of the church’s custodian, the conspicuous assets of the Sanctuary they went to the Ecclesiastical Academy of Arezzo and the church became a parish. 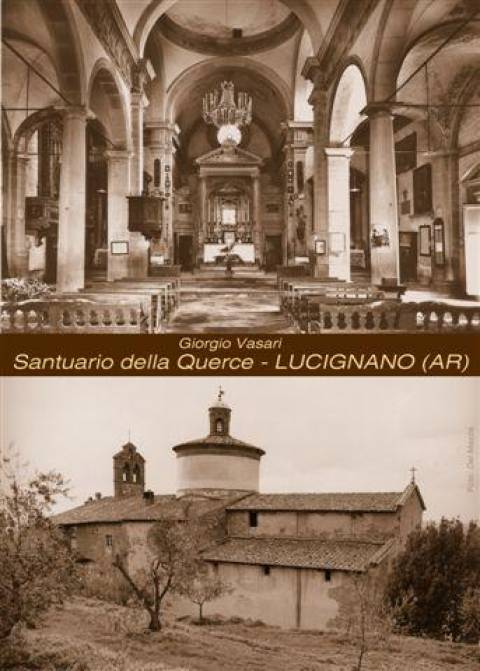