Every supernatural grace coming to mankind after the Fall of Adam, flows from the bloody sacrifice of Christ on the Cross.  Almighty God could have made some other arrangement, but as a matter of fact, He did require the sacrificial shedding of the Blood of Christ for the restoration of fallen man to the order of grace.  The Bloody Sacrifice is the price which God demanded; it is the price which the Redeemer paid.  To this Bloody Sacrifice, the Blessed Virgin has a most intimate and singular relationship because of which we may rightly call her the MADONNA OF THE MOST PRECIOUS BLOOD. 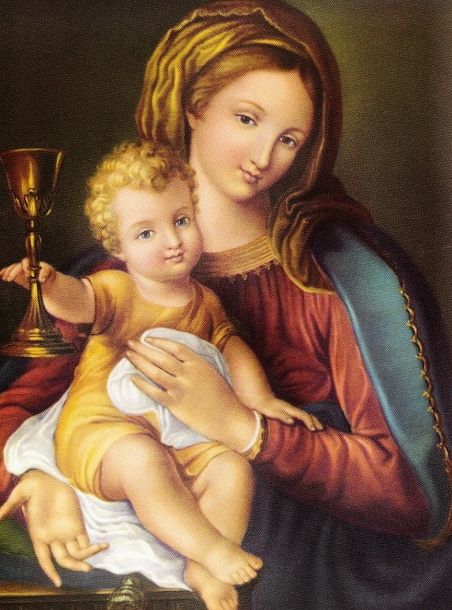 For a sacrifice in the strict sense, there must be a priest who offers and a victim which is offered.  In the Sacrifice of Redemption, Christ Himself is both the priest and the victim.  The very coming of the Redeemer as Priest and Victim and therefore also the fruits of His Sacrifice, were dependent upon Mary’s consent and cooperation.

At the time of the Annunciation she gave her consent to become the Mother of Jesus, that is, of Him who “should save His people from their sins.”  He was to save them in the manner in which God had predetermined, namely, by His whole lifework, but especially by His Bloody Sacrifice.  “Be it done to me according to Thy Word,” is the reply of Mary to the Angel.  Thus she gave her consent to all the events of His life, including the Bloody Sacrifice, at least implicitly at the Annunciation and explicitly as the plan of God unfolded itself.  She is not the Mother of a Son who became a Priest independently of her after His birth, for Jesus was conceived as a priest.  As a Priest He was born and was nourished and clothed and sheltered by Mary.  But this Priest is also the Victim.  Thus, as only His Mother could, Mary prepared the Priest and Victim for the Bloody Sacrifice of Redemption.  With Him she also offered the Sacrifice by sharing His sorrow and suffering by perfectly uniting her intention with His and by resigning herself perfectly to the will of the Father.

Furthermore, as God called Mary to be most intimately and uniquely associated with her Priestly Son in the acquiring of grace, He also associated her with Him in the dispensing of grace.  This fact is succinctly expressed by the Holy Father when he writes:  “By reason of this communion and sorrow between Mary and Christ, she merited to be called most rightly the Restorer of a lost world and therefore the Almoner of all the gifts which Jesus earned for us by His Death and His Blood.