The story goes that as the Lombard hordes approached in 641, villagers of Soviore buried their statue of the Madonna for safekeeping and fled toward the Mediterranean, to what is now the Cinque Terra town of Monterosso. 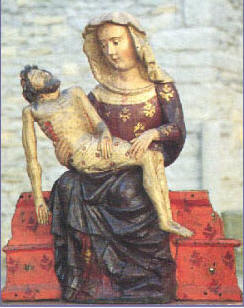 A hundred years later, on July 7, 740, the parish priest was hunting at dawn, when he noticed a dove fly into a hole in the ground. His efforts to uncover the spot thwarted by a sandstone slab, he returned the next day with three helpers with shovels, who unearthed a wooden statue. When the priest tried to carry it home, it was too heavy to move, so he left it there. On the following day, people who came to see the statue found it had moved to the top of a nearby chestnut tree. They brought it down, but it for several days it repeatedly reappeared in the tree, an indication to the villagers to build a chapel at that spot. 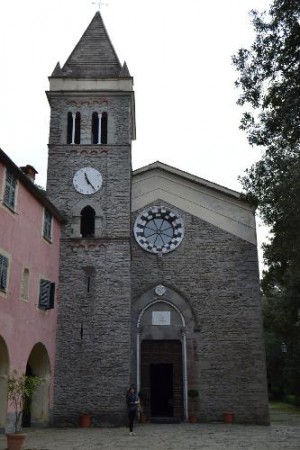 Today the 16th-century octagonal chapel stands on the bluff overlooking Monterosso. Its venerated statue is a Gothic Pietà of the 1400s, crowned August 10, 1749. Possibly the original statue was not a Pietà; Nostra Signora di Soviore is celebrated on the Feast of the Assumption, August 15.

Picture and information from the sanctuary’s site, web.tiscali.it/soviore.