On 22 March 1888, while looking for a missing lamb, Bibiana, attracted by the blaze that emanates from a cave, approaches it, and immediately finds herself immersed in a celestial vision: The Virgin half-kneeling, with her hands extended and his eyes turned to heaven is there, in the act of imploring and offering; at his feet lies Jesus dead covered with blood and sores. 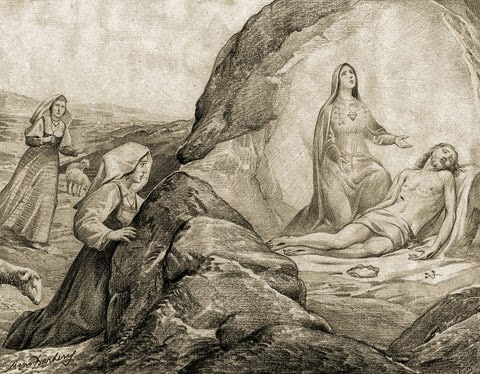 The news of the apparition’s spreads with the rapidity of a flash throughout Castelpetroso and spreads to successive waves in all the neighboring countries and regions. Crowds of faithful, as if struck by a thrill, feel attracted to make a pilgrimage towards the cave of “Cesa tra Santi” (name of the apparition site) and their number grows day by day: the mountain soon gives the impression of a human anthill. Only a few days after the apparitions, around 4000 pilgrims are counted in apparition site in a single day.

Monsignor Francesco Palmieri, Bishop of Bojano, at the first manifestation of these extraordinary events, immediately puts the apparition site under control and indicates a first preliminary investigation to carry out investigations into the alleged apparitions. Later, the same Holy Father Leo XIII, even if only orally, appointed him Apostolic Delegate, giving him the task of carrying out an inspection of the cave of the Apparitions on behalf of the Holy See. 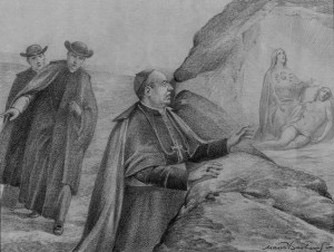 On the morning of September 26, 1888, the Bishop went to the cave of “Cesa tra Santi!”, and he too had the grace to see the Sorrowful Mother, in the same attitude described by the first two visionaries. These are his words: “With joy I can say that the portents of Castelpetroso are the last traces of Divine Mercy, to recall the lost souls to the right path. I also can testify that, having gone myself in the sacred place, and focusing myself in prayer I had the ‘apparition of the Virgin “.

Bishop Palmieri speaks in terms of full acceptance of the phenomena of Castelpetroso that are configured in a divine plan and not in the sense of only of a hysteria and an illusion.

The press immediately echoes the facts of Castelpetroso: “The Servant of Mary”, a bi-monthly Mariana magazine published in Bologna by the Servants of Mary and some lay people, is one of the first to publish and disseminate the news of the Apparitions, also keeping update on the events, with punctual loyalty, to keep 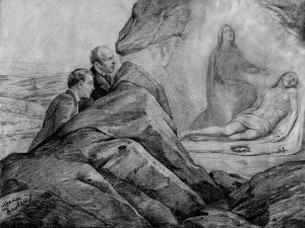 readers updated on the news that are recorded about the apparition from time to time. The director of the magazine, Carlo Acquaderni, in November 1888 goes to the blessed cliff site together with his son Augusto: in the heart of his father there is the great hope of obtaining the healing of his son, condemned to die for the tragic consequences of an incurable illness, the tuberculosis of the bone. Faith, when it is firm, true and sincere, can only obtain miracles: Augustus miraculously heals!

28 September 1890: the laying of the first cornerstone of the Sanctuary

In the explosion of his enthusiasm, for recovered health of his son, Carlo Acquaderni, through the Marian magazine he directs, appeals to all the devotees of Our Lady of Sorrows for the collection of offers to be used for the construction of “an oratorio or a small chapel” – he affirms – in that place blessed by the special presence of Mary. 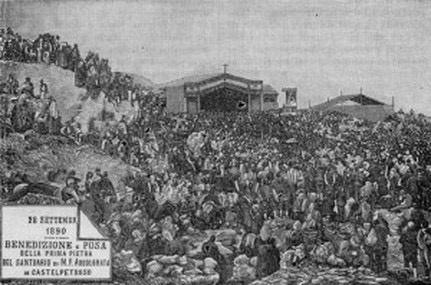 His wish is in harmony with that of Bishop Palmieri: the construction of a sacred building in honor of Our Lady is one of the central points of the development program that Msgr. Palmieri is drafting for “Cesa tra Santi”. The Holy Father, informed by the Bishop of the initiative, approves and blesses. Acquaderni, after making an agreement with the Bishop, begins his work of penetration and sensitization for the construction of the Sanctuary. The movement spreads like

wildfire. In early February 1890 Eng. Francesco Gualandi of Bologna, in charge of the design of the temple, already delivers the project and the drawings. Beginning the preliminary work for laying the first cornerstone and 28 September 1890 in the presence of about thirty thousand people, in an atmosphere of joy, intense prayer, faith and fervent expectation, Bishop Palmieri, during a very solemn celebration, places the first cornerstone that marks the beginning of the construction.

The construction of the Sanctuary was carried out through the generous offerings of the faithful and saw alternating moments of intense and solicitous work and also moments of interruption and crisis. 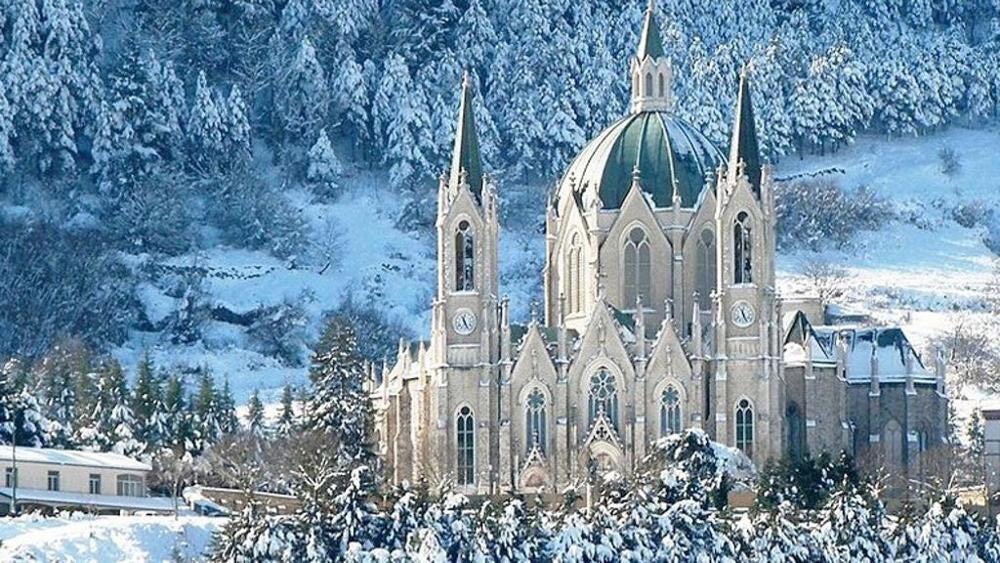 The fact that such a demanding work has been carried out, albeit in a prolonged timeframe, with few resources and few financial resources, is to demonstrate the essential role of Providence.

On 6 December 1973, at the request of the Bishops of Molise, the Holy Father Paul VI issued a decree proclaiming the Blessed Virgin Mary of Sorrows, venerated in the Sanctuary of Castelpetroso, PATRONESS OF MOLISE.

The message of the Our Sorrowful Mother of Castelpetroso. 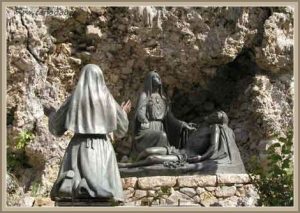 Mary is in a very different attitude from the one with which the Lady of Sorrows is usually presented, as commonly evidenced from popular piety: even here her face expresses immense sorrow, but she is in a regal attitude of priestly motherhood; kneeling, She has Her arms extended in an act of offering: She offers Jesus, the fruit of Her womb, to the Father, as the Victim of expiation for the sins of humanity. Aware of the redemptive mission of Jesus who must redeem humanity precisely through suffering and before the Crucified Son, She, “lovingly consenting to the immolation of the victim generated by Her”, as Lumen Gentium says (No. 58), accepts the Will of the Father, uniting Herself with the redemptive sacrifice of Jesus.

This attitude of Our Lady confirms a theological truth: God has associated the Blessed Virgin with the work of the Redemption. and She, conforming herself fully to this will, with Her suffering accepted and offered, has become Coredemptrix of the human race. All the sacrifices and pains offered, all the tears and sufferings of Our Lady of Sorrows, which reached their climax at the moment of Jesus’ death, by God’s pleasure, have coredeemed the whole of humanity, in union with the sufferings of the Redeemer, “mixing (Mary’s suffering)” , as it could be said, with Christ’s own sufferings. 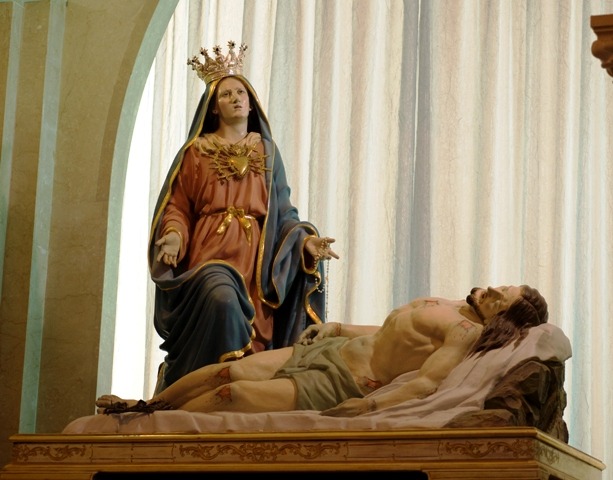 The message of Castelpetroso is very profound and invites us to reflect on Mary’s coredemptive pains, on the overabundance and super-effusion of the Mother’s love: as Mother Coredemptrix, She has generated us in the life of the grace at the price of indescribable suffering. Our Lady of Castelpetroso taught us the need to cooperate in the sufferings of Christ as St. Paul said. The apparition showed Her in a regal attitude of priestly motherhood; kneeling, She has his arms extended in an act of offering: She offers Jesus, the fruit of his womb, to the Father, as the Victim of expiation for the sins of humanity. God has associated the Virgin with the work of Redemption, and she, fully conforming to this will, with Her suffering accepted and offered, has become Coredemptrix of the human race. This is the message of Castelpetroso: Holy Mary, as Mother Coredemptrix, has regenerated us to the life of grace at the price of unspeakable suffering.