The story goes that St. Augustine of Hippo in North Africa (d. 420) revered this 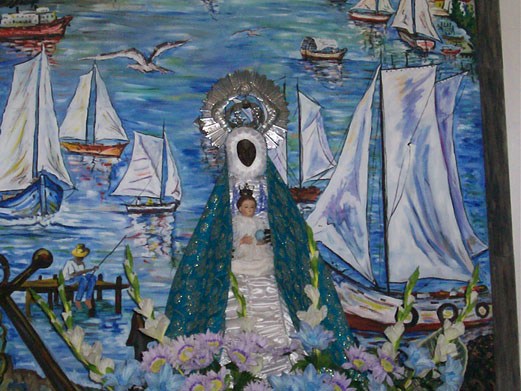 Black Madonna statue or even carved it; that Augustinian hermits brought it to southern Spain; that it was hidden from the Moors in a well under a fig tree, and found with the help of an apparition of the Virgin by a priest from León in the 1300s, near the Castle of Regla (Rule). The wooden statue is 2 feet high. The Virgin is seated on a throne with a headless Child standing on her left knee. Since the 1600s the image has been sumptuously vested and displayed with a doll-like white Child between her hands, outside the robes. Some art historians date the statue to around 1200, others to 1300. The shrine dates from the 1300s. In subsequent 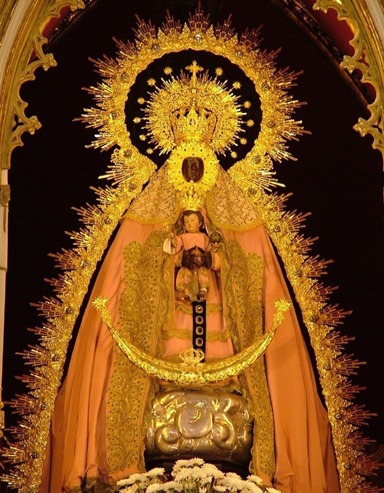 centuries, devotion to Our Lady of Rule sailed from this town at the mouth of the Guadalquivir on Spain’s southern coast around the world to places as distant as Cuba and the Philippines. Chipiona’s present sanctuary in neo-medieval style was completed in 1906. On September 5, 1954, the statue descended its steps on a massive throne. Surrounded by a throng of pilgrims from around the region, Cardinal Pedro Segura y Sáenz, Archbishop of Toledo, crowned the Virgin de Regla Queen of Chipiona. On September 8, Feast of the Nativity of  the Virgin, the statue processes in splendor around the shrine. (Photograph from “Concierto Inaguración De los Actos del Cincuenta Aniversario de la Coronación de la Virgen de Regla en Chipiona (Cádiz),”