“Who is she that comes forth as the morning rising, fair as the moon, bright as the sun, terrible as an army set in battle array?” (Antiphon from the Catena Legionis daily prayer) 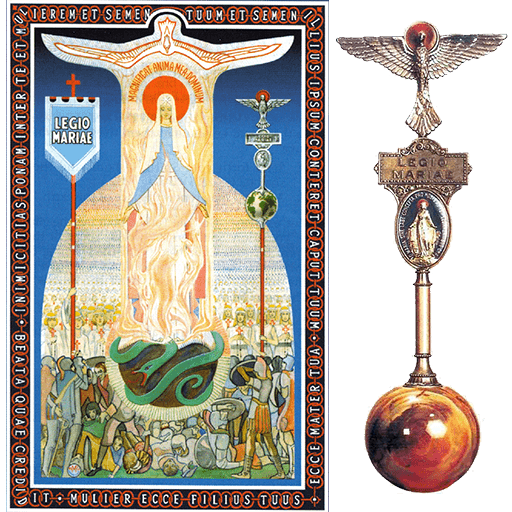 The first meeting of the Legion of Mary took place in Dublin, Ireland, September 7, 1921, founded by Catholic layman Frank Duff as an organization for women.  In 1929, the Legion opened to men, and in 1931, it came to the United States. There are now over 3 million members worldwide. The Legion is organized along the lines of the Roman Army; members belong to local Praesidia which meet weekly for prayer and planning, with three administrative levels between them and the Concilium in Dublin (www.legion-of-mary.ie). All Praesidia have a priest as spiritual director, but otherwise the Legion and its officers are Catholic laity. Each member promises to say daily prayers, attend weekly meetings, and perform two hours of service per week. The purpose of the service is both to help the church and community and to fulfill members’ baptismal promises by performing the traditional Works of Mercy, both corporal (feed the hungry, give drink to the thirsty, clothe the naked, shelter the homeless, visit the imprisoned, visit the sick, bury the dead) and spiritual (admonish the sinner, instruct the ignorant, counsel the doubtful, comfort the sorrowful, bear wrongs patiently, forgive all injuries, pray for the living and the dead). The image of Mary on the Legion’s prayer booklet shows her succoring souls in Purgatory.

VIDEO DOCUMENTARY OF THE FOUNDER OF LEGION OF MARY: