In the eighteenth century the chapel carved into the rock by Bonifacio Rotario, now inoperable, was replaced with a wooden one; even this, however, at the 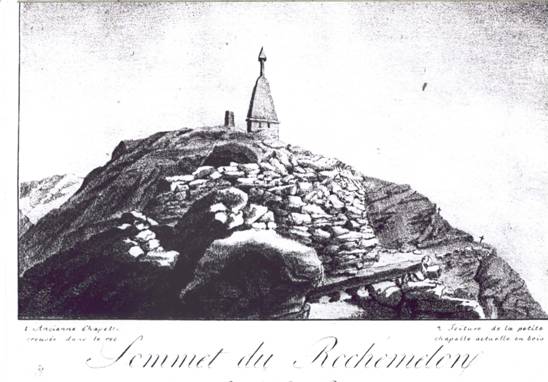 mercy of the atmospheric agents, had a short life, and in 1895 the canon Tonda decided to build a new one, which was blessed on August of the same year. In 1913 a fire destroyed the chapel on the summit and the bishop of Susa Giuseppe Castelli and the canon Tonda decided to rebuild the chapel, but also to annex a refuge, so that a priest could stay at the top to assist the pilgrims in the period of greater influx of tourist, that is from the 1st  up to the 15th of August.

Popes Pius X, Benedict XV and Pius XI supported the rebuilding with offerings, but due to the outbreak of World War I, the rebuilding was only begun on August 15, 1920, when Bishop Castelli blessed the first stone. Designed by the architect Reviglio, the chapel-shelter was inaugurated and blessed by the bishop Umberto Rossi on 12 August 1923.

It was during this period of construction that the foot path from Ca ‘d’Asti to the summit was eventually traced. 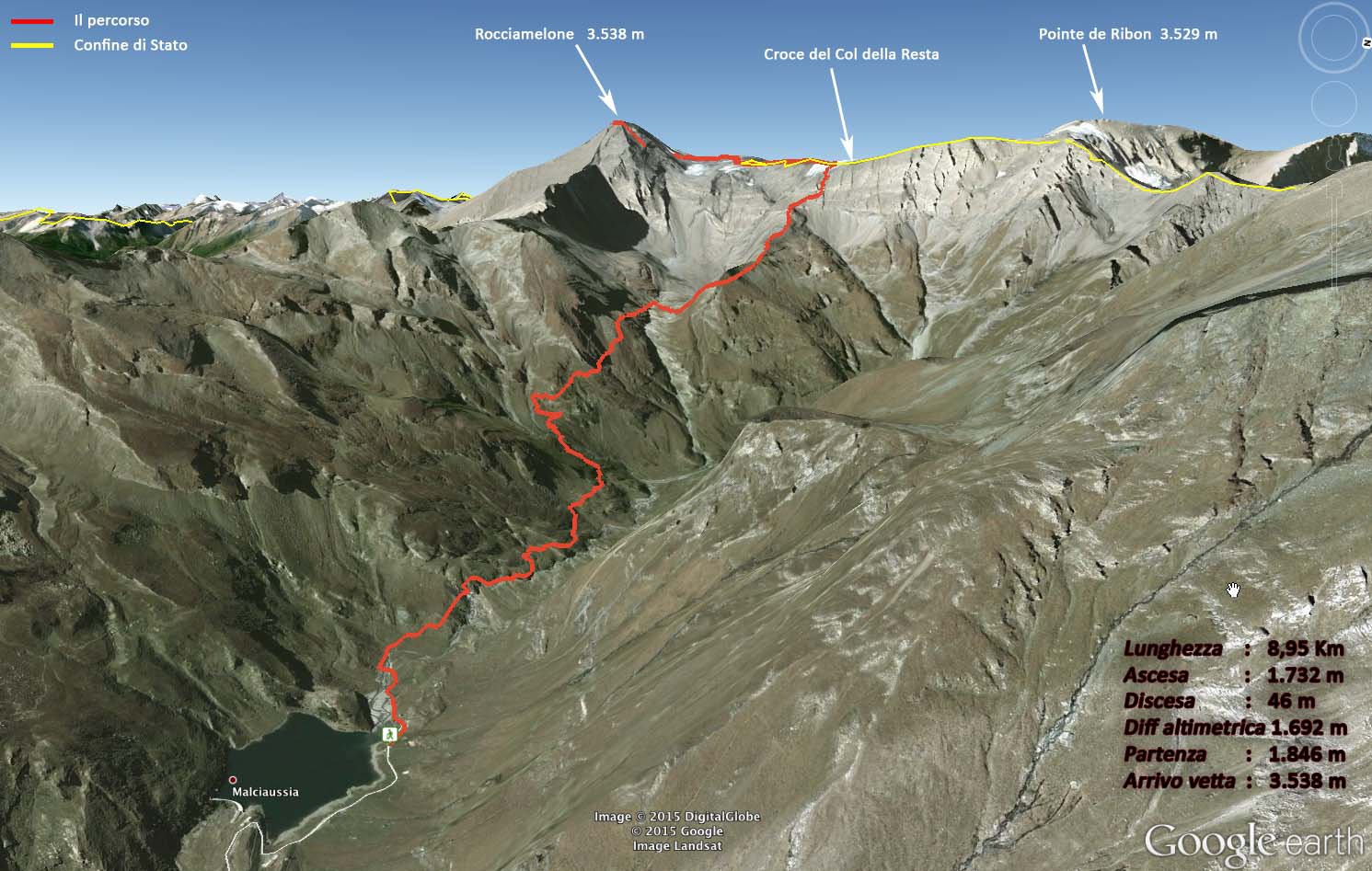 In the Seventies, the Val Susa Section of the National Alpine Association, having ascertained the need for some major renovation of the chapel-shelter, established together with the “Giovane Montagna” society and the bishop of Susa Giuseppe Garneri, the Committee for the reconstruction. 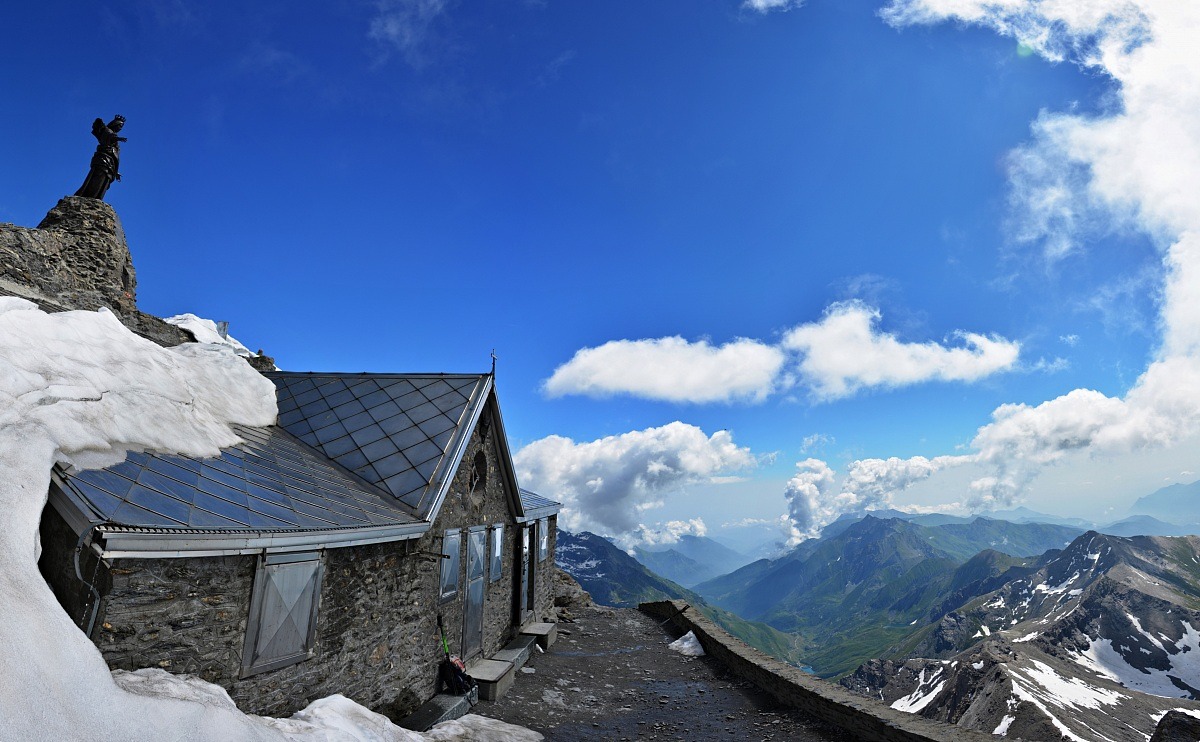 Once the aims of the Committee have been made known, the aid arrived generously from the whole Susa valley and also from other areas of Piedmont: sending materials, money and volunteers for the work … The reconstruction also involved work on the refuge Ca ‘d’Asti.

The Children of Italy and Mary

In 1895 the canon Antonio Tonda, provost of the cathedral of Susa, proposed to build a statue of our Lady on the summit of Rocciamelone, and Giovanni Battista Ghirardi, director of the newspaper for children “Innocenza” (Innocent), suggested that the funds for the construction of the monument should not come from the rich and powerful, but from the children of Italy.

In 1896 he published an article in the newspaper inviting the “Bimbi d’Italia” (The Little Children of Italy) to contribute to the construction of the statue, with the subscription of 10 cents per person. The names of the children will be written in a special volume and placed at the foot of the statue, right on the summit. 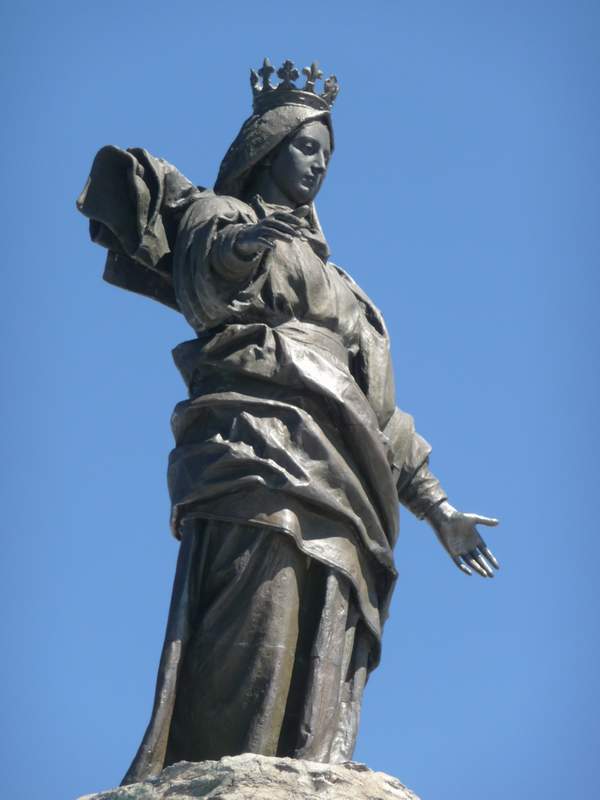 The statue was designed by the Turin sculptor G. A. Stuardi and cast in bronze in the Strada di Milano factory: 4 meters high and divided into 8 pieces to facilitate transport, weighing all in all 650 kg, to which must be added the 800 kg for the internal armor.

Pope Leo XIII blessed the work and wrote the dedication to be placed on a bronze plate at the foot of the statue: “Alma Dei Mater / nive candidior / MARIA / benign lumine Segusiam respice tuam / Ausoniae tuere fines / coelestis Patrona” (“O Mary, the great Mother of God, more candid than the snow, look with a benign eye on your Susa, and protect, dear celestial protector, the borders of Italy “).

On 15 June 1899 the statue was mounted in Piazza d’Armi in Susa to receive the solemn blessing.

Transport to the summit was entrusted to the Alpini (mountain troops) of the Susa battalion: on the 26th, 27th and 28th of June all the pieces necessary for the installation of the statue were transported to the Ca ‘d’Asti shelter and placed in the chapel.

The most difficult part begins on July 26: when 60 alpine guides led by Lieutenant Parravicini and some men from Mompantero repeatedly transported the various pieces of the statue from Ca ‘d’Asti to the top of the mountain, where before there was no foot path to the top of the mountain. At 10am on July 28th 1899 the statue of the Madonna reached the summit of Rocciamelone.

The names of all those who gave their contribution were collected in a volume and placed at the foot of our Lady, in the same niche that already contained the names of the 130,000 Children of Italy who made possible the construction of the statue.