The Sanctuary of the Madonna dell’Archetto is the smallest Marian shrine in Rome.

The image of Maria, Causa nostrae laetitiae (Mary, Cause of Our Joy), also called Madonna dell’Archetto, was painted on stone in 1690 by the Bolognese painter Domenico Muratori. 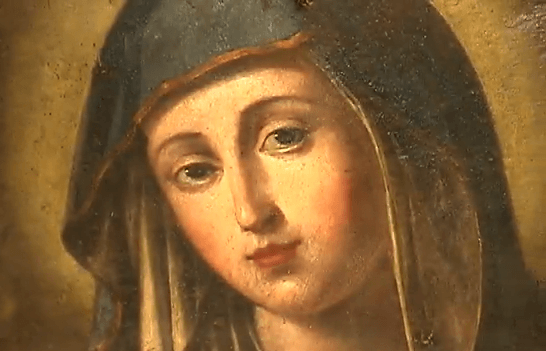 Miracle and veneration of the image

On July 9, 1796, the image prodigiously moved Her eyes. This prodigy was recognized as authentic after a rigorous apostolic process, after the Roman architect Virginio Vespignani raised the small church in neo-Renaissance style in 1851. Our Lady’s pupils moved repeatedly before ever more numerous crowds of people. The extraordinary event was an invaluable grace during the tragic events that the Latin world, and Rome in particular, were called to live as a result of the French Revolution. This extraordinary intervention served to keep the people of Rome attached to the faith and to the Pope, especially on the occasion of the imprisonment of Pius VI and Pius VII.

The feast of the miraculous event is celebrated on the first Sunday of July.

The image, much revered by the Roman people, was crowned by the Vatican Chapter on November 1, 1946; Here is a list of some famous persons who in front of the Marian image stopped and prayed: