According to longstanding local tradition, the apostle St. James the Greater (Santiago) 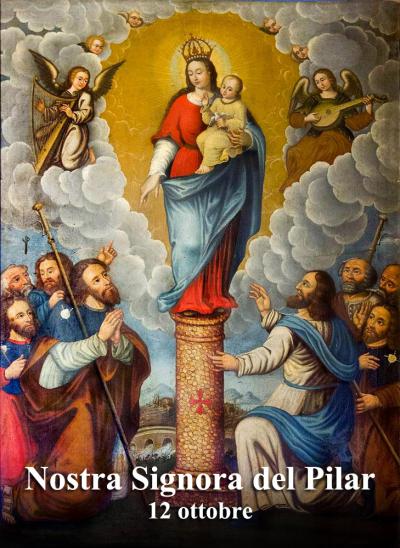 was evangelizing Spain with eight followers when, on the night of January 2, 40, Christ’s mother Mary appeared to him, standing on a stone pillar. She asked for a church to be built there, promising help to those who would call on her. When she disappeared, the pillar remained to mark the spot; some versions also hold that the Blessed Virgin gave St. James a statuette of herself. Although this sounds much like many later apparitions of the Virgin, it would have occurred when Mary was still alive, not by descent of her glorified body from heaven, but by miraculous transport or bilocation from the Middle East. A French document of 835 mentions the presence of a Church of the Virgin Mary in Zaragoza, but its great relic then was the remains of the martyr St. Vincent, not a pillar or statue. Moslems had held the city since 714; after Alfonso I’s Christian reconquest in 1118, a Romanesque Church of the Virgin was built, which burned 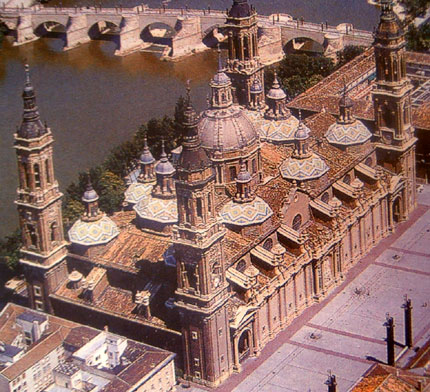 completely in 1435. The wooden Virgin and Child atop the jasper pillar in the present baroque basilica of the 1700s dates from around the time of the fire. Our Lady is standing, holding the Child in her left arm. He is naked, but she wears graceful drapery and a carved crown. Three feasts are celebrated in her honor: January 2, the Venida de la Virgen (Coming of the Virgin); May 20, anniversary of her canonical coronation in 1905; and October 11-12, the Fiesta del Pilar. The statue is always displayed “vested” — draped in a magnificent embroidered gown — except on the 2nd, 12th, and 20th of every month. The Virgin of the Pillar is one of the best-known Marian devotions in the Spanish-speaking world, where Pilar is a common girls’ name.

Hymn to the Virgin of the Pillar

Holy Virgin, my dear Mother,
lovely radiance, light of day
who once honored Aragon
with a visit to these places,
this community that loves you
asks a favor of your love
and acclaims and blesses you,
and your Pillar still embraces.
Sacred Pillar, radiant beacon,
precious gift of charity,
blessed Pillar, throne of glory,
you’ll bring us to victory.
Sing, sing
hymns of honor and of praise
to the Virgin of Pilar.