The icon is found in the most important sanctuary of the city and of the Archdiocese of Turin. According to the legend, a Czech from Briançon, after dreaming the Virgin, went to Turin to look for the sacred image and when he succeeded he regained his sight on June 20, 1104. 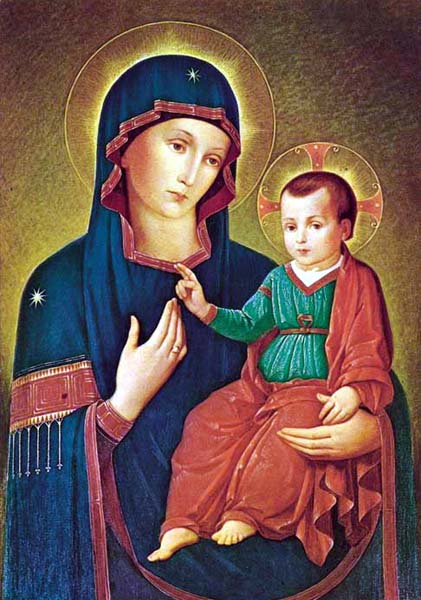 The Sanctuary of the Madonna della Consolata (Our Lady of Consolation [the Conslà in Piedmontese]), or according to the official denomination, Church of Santa Maria della Consolazione, is a Catholic basilica located near the homonymous street and is one of the oldest places of worship in Turin. Dedicated to Mary, invoked with the title of “Comforter”, it is considered the most important sanctuary in the city and the Archdiocese of Turin, as well as a true masterpiece of the Piedmontese Baroque. Great names of architecture dedicated themselves to its construction, such as Guarino Guarini, Filippo Juvarra and Carlo Ceppi. The sanctuary was also the usual place of prayer for numerous Piedmontese saints. It has the dignity of a minor basilica. 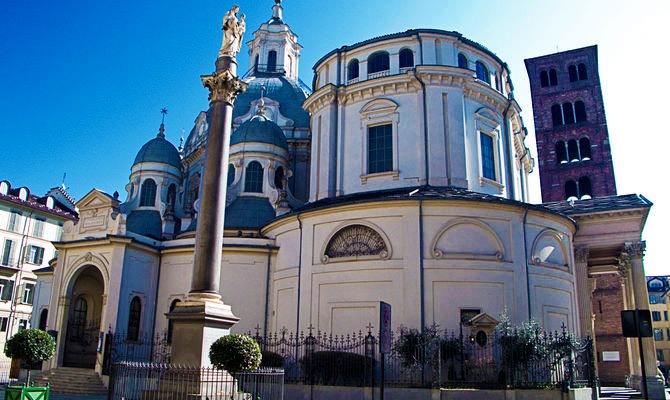 The tetrastyle pronaos of the portal bears the Latin writing CONSOLATRIX AFFLICTORUM or “Consoler of the Afflicted”. It would therefore be more correct to call the church “Sanctuary of the Comforter”, however, it has always been referred to as Consolata, as if it were Mary who was consoled and not Her, the consoler.

The Sanctuary stands on the remains of one of the corner towers of the walls of the ancient Julia Augusta Taurinorum. Here, in the 5th century, Bishop Massimo built a small church dedicated to Saint Andrew, probably on the remains of a previous pagan temple, with a chapel dedicated to the Virgin, where an image of Mary was placed. Shortly after the year 1000, the church was the seat of the Novalicensi monks, veterans of the expulsion from the Susa Valley by the Saracens.

The great devotion that binds the city to this sanctuary originates from a painting depicting Our Lady, of which a posthumous copy is still preserved inside the current crypt of the sanctuary. The story goes that the icon was lost during the various alterations of the church. 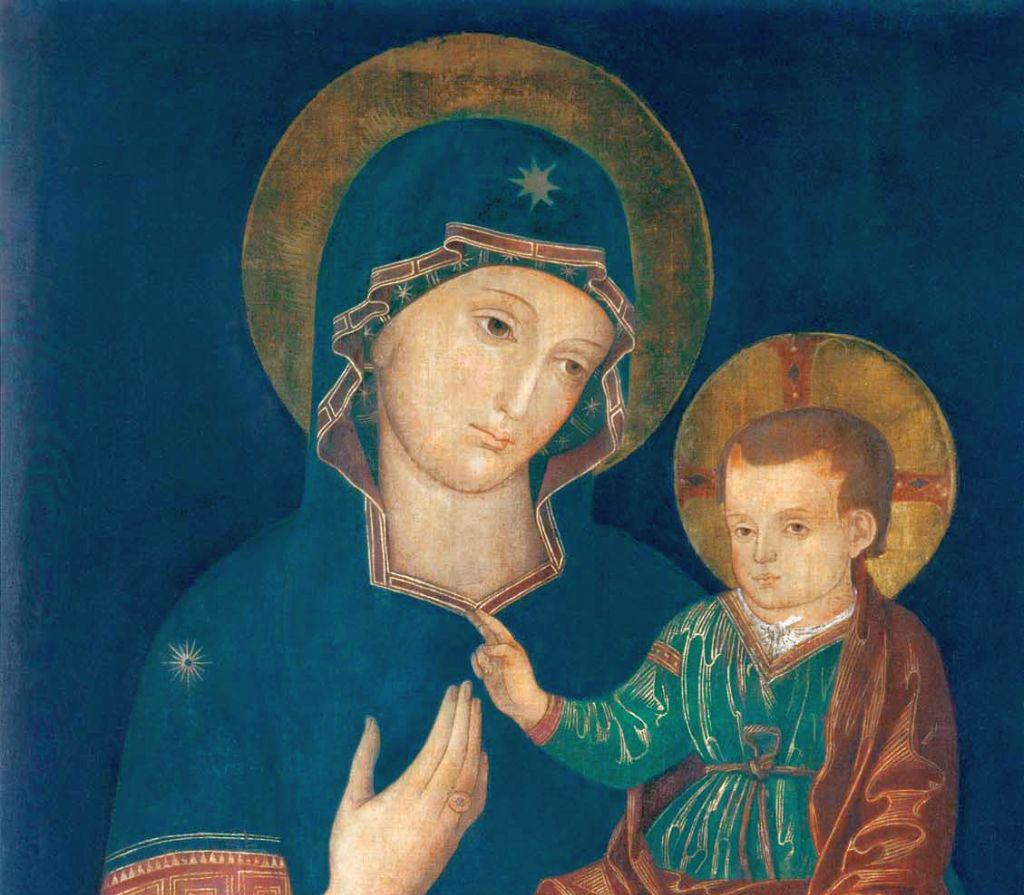 A blind man, whose name would correspond to Giovanni Ravacchio, who came from Briançon, arrived in Turin on a pilgrimage claiming that he had received precise indications from Mary regarding the recovery of this sacred image. When, after some insistence with the episcopal authorities, it was found, and the man recovered his sight. It was June 20, 1104. Following this miraculous event, the church of Sant’Andrea was restored, elevated to the rank of basilica and the icon solemnly placed within it. The episode is not supported by official documents, however, there is a plaque inside the church, dated 1595, which seems to confirm the incident, as it confirms the text of an official parchment from 1104. 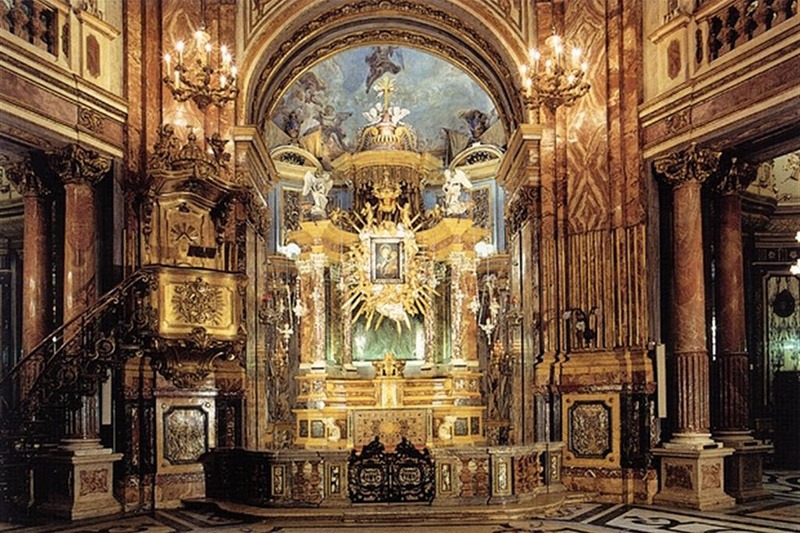 From the Benedictines who made a further expansion it passed to the Cistercians who remained there for over two centuries. After the rebuilding of the work in 1703, the basilica was given back to the faithful who made it the center of Turin’s faith and religion during the hard days of the Franco-Spanish siege. The city recommended itself to the Consolata for its own salvation, and as a votive offerings, a series of pillars bearing the image of the Virgin and the memorandum date 1706 were placed in the points of greatest importance around the city.

Its unfavorable geographical position, as it is close to the city walls, made the sanctuary vulnerable to the heavy bombing of the siege of Turin in 1706 but, despite the cannon shots, it remained largely intact: a bullet that hit the base of the dome can still be seen today from the street of the Consolata. On the external side wall it is possible to see the commemorative plaque bearing the inscription “Bullet Siege June 1704”. Following the fatal event, the city council elected “Maria Consolatrice” co-patron, together with Saint John the Baptist, of the Piedmontese capital. 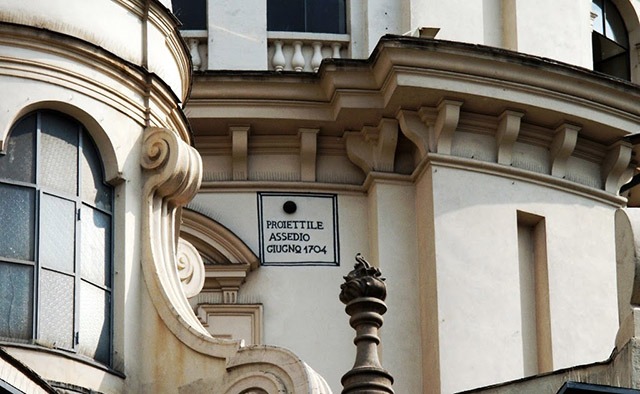 The Napoleonic decree of 1802 imposed the suppression of religious orders and the monks of the Cistercian Order were forced to abandon the sanctuary which, for a short period, was transformed into a barracks. In 1815 the sanctuary returned to being a sacred place and the regency was entrusted to the Oblates of the Virgin Mary, at the behest of Archbishop Luigi Fransoni. In 1835, following the outbreak of a cholera epidemic, the city administration erected the column on the square adjacent to the road of the Consolata. 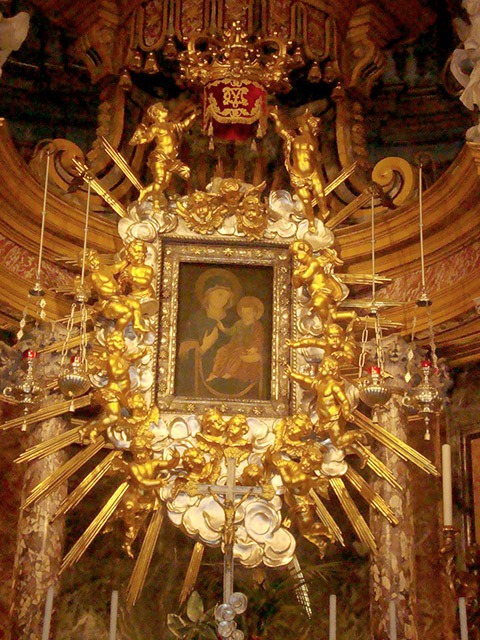 In the 19th century Secondo Pia, famous for being the first to photograph the Holy Shroud highlighting its photographic negative properties, was commissioned to photograph the ancient portrait of the Virgin, in order to reproduce copies of it for distribution. During the delicate dismantling of the frame, a writing emerged at the base of the painting, identifying it as portraying Santa Maria de Popolo de Urbe (Holy Mary of the People of Rome), thus tracing the work to a reproduction of the artist Antoniazzo Romano and later brought to Turin by Cardinal Della Rovere . Although it is not therefore the original icon present in the ancient church of Sant’Andrea, the current one has been and continues to be the object of veneration. This is testified by the many ex-votos donated by the faithful, visible in the right aisle.

The saints that Turin has had over the centuries have always been particularly linked to this sanctuary. Among them, Saint Joseph Cafasso, who is buried inside the sanctuary, Saint John Bosco and Saint Leonard Murialdo who went there frequently; in addition, Blessed Giuseppe Allamano, founder of the Consolata Missions Institute, was rector from 1880 to 1926.

The feast of the Madonna della Consolata is celebrated on June 20 of each year. This date is chosen in memory of the miracle of the blind man of Briançon. Remarkable, on the day of the feast, is the procession around the streets of the city. 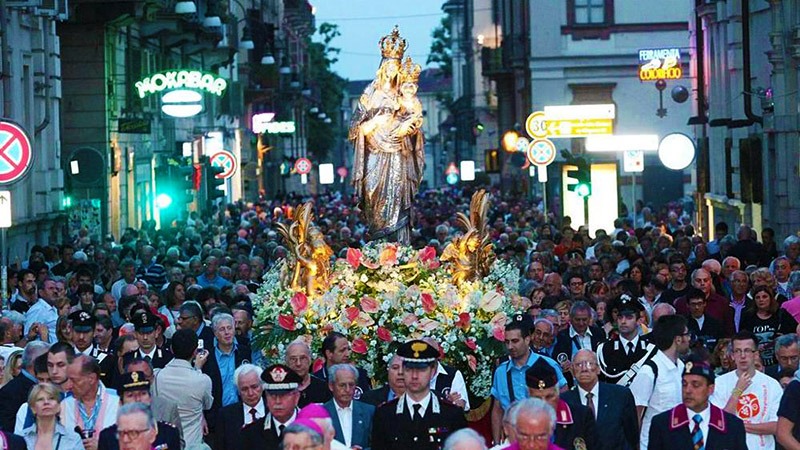